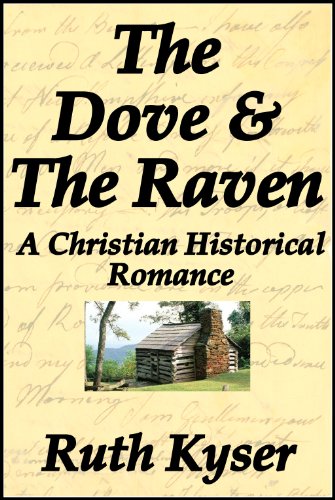 Book: The Dove and The Raven by Ruth Kyser

about this book: One day during the American Revolutionary War, Hannah Stewart and her sister go to the fields to pick some nuts, only to discover a man who they think is an injured soldier. Unfortunately, they can't tell if he's a British soldier or fighting on the side of the Colonists.

Their father, a staunch Christian, makes the difficult decision to nurse the man to help--not knowing if they are helping the enemy or not. When the young man awakes, the Stewart family is even more surprised to discover he doesn't know who he is or anything about his past.

Set during the final years of America's battle for freedom from the British Monarchy - the American Revolutionary War -- the story line is told through the eyes of both Hannah Stewart and the young man, Samuel, who has no past. Interwoven between the pages are the supporting characters, and the story of the birth of a new nation.

I really love history, and while searching my own family genealogy I came across an ancestor who came to this country during the American Revolution, fighting on the side of the British. After he was injured and captured, he decided to change sides. That was the seed of the story that became "The Dove and The Raven".

This was the first book I ever published and it took me several years to complete the manuscript. A great deal of research had to be done because of the time period involved, but I enjoyed delving into our nation's past and learning about how we as Americans came to be the independent folks we are.

This is a Christian book, written about a young man searching for his past and identity--not only in real life, but also as a child of God. I hope everyone who reads it will enjoy it, and also be reminded of how much God loves them.

Other books by Ruth Kyser (more)