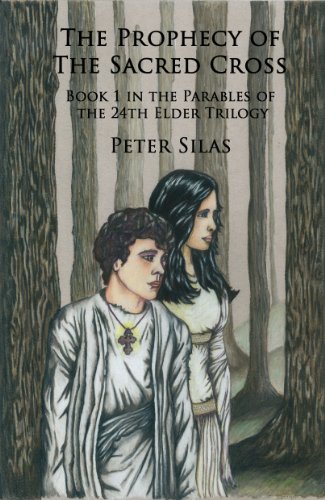 Book: The Prophecy of the Sacred Cross (Parables of the 24th Elder Series) by Peter Silas

about this book: Book 1 in the Parables of the 24th Elder Series, The Prophecy of the Sacred Cross is a completed 120,000-word Christian fantasy novel about a twelve-year old boy who is given an opportunity to battle temptations. Yes, we all face this daily in our lives, but rarely in the context of being chased by demons, transported to the heavens, introduced to intelligent creatures, educated on the mysteries of the cosmos and finally transformed into a wise elder before combating the father of lies.

Here's how it goes: It is halfway through the twenty-first century in America and religion has become a thing of the past. Religious practice must be kept private, and many have abandoned their faith because of it. Exceptionally, Timothy Petrov "fights the good fight of faith" and accepts the world for what it is. That is to say, until his dreams become more troubling: he curiously connects them to worldly disaster. Father John, Timothy's dad, also is attuned to global misfortunes and links them to the imperative revival of the Ancient Catholic Church. Realizing there is little time, he turns to an assembly of bishops only to meet resistance and listen to their frustrations with his late father's prophecies. But before the end of the emergency council meeting, Father John must depart as he is informed that Timothy has been in a horrible accident. Unknown to Father John, his son was actually transported to the Kingdom of Heavenly Creatures. He there receives protection against fallen angels who, in pursuit of a cross given to him by his grandfather, go to great lengths to disrupt his life both in the visible and invisible worlds. Through perseverance Timothy strives to overcome temptation and trials, in hopes to return home to continue the divination.

As a former practicing nurse and devout Orthodox Christian, I have observed through experience and study how physical and mental struggles impact one's ability to remain hopeful while she or he lives among the secular, religious or even both – and, more specifically, how Christians struggle in faith during progressive times. And that's why I wrote this book. To me, that was the easy part. The hard part is going to convince the audiences out there that it is worth reading.

So, here's the audience I aim to captivate: I speak primarily to the young adult audience, but also extend my writing to additional audiences including adults. That's the unique part of this novel, as it can reach so many individuals in personal, meaningful ways. Whether a Christian, a person looking for a deeper meaning in life, a Christian fantasy lover or a plain-old fantasy lover, one can form a deep connection with this novel. Moreover, it could capture those hungry for a series; I am currently working on the second book of the Parables of the 24th Elder Series.

Here's a few quotes from reviews to help you with your consideration:

• "The storyline is very interesting, and appeals to both religious and non-religious readers. Although a fantasy, this book is thought provoking and makes one reconsider the current state of society and how it has evolved from times past."

• "The debut novel by Peter Silas is enthralling. He takes a complex plot line with multiple perspectives happening simultaneously and weaves them together seamlessly."