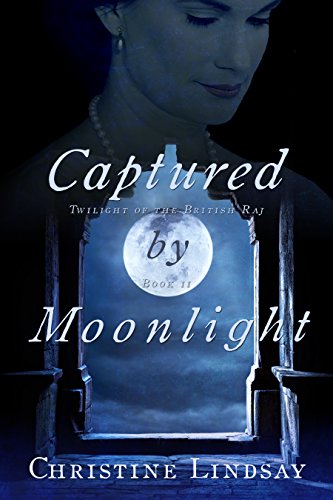 Book: Captured by Moonlight (Twilight of the British Raj) by Christine Lindsay

about this book: CAPTURED BY MOONLIGHT is Book 2 of my series Twilight of the British Raj. This historical novel is written from a Christian worldview. When I was growing up on the blockbuster, epic, historical romances by the great MM Kaye, I knew that if I ever wrote a book, it would have to be in the setting of British Colonial India, but from a Christian viewpoint.

British Colonial India was as exciting a time as the Wild West was to America. Talk about romantic British military heroes, or doctors and nurses going out to India to ease the suffering of the Indian people.

CAPTURED BY MOONLIGHT takes up the story of two characters from Book 1 SHADOWED IN SILK. Eshana is a former child Hindu widow, and I always wanted to tell more of her dramatic story. Nurse Laine Harkness is also a spunky character I wanted to give a happy ending to. But not before I had her go through another series of heartaches.

At the start of the book, these two vivacious women, Eshana and Laine, can't help themselves, and are rescuing young girls from the sex trade in northern India. When the local police catch on to this, the two young women must flee from the north of India to the tropical south. But each women is then thrust into her own respective past and danger.

CAPTURED BY MOONLIGHT is inspired by a number of things. One is the amazing true-life missionaries who gave their lives to the Indian people, such as Dr. Ida Scudder who built the largest teaching hospital in SE Asia. The other true-life heroine is a beautiful Indian Christian woman named Pandita Ramabai who developed a large refuge for cast-off widows and children which is still in existence today.

Also, I was always fascinated by the old classic novel, Love in the Time of Cholera. I didn't care for the actual novel, but I sure liked the title.

So CAPTURED BY MOONLIGHT is what I think Love in the Time of Cholera should have been like---suspense, mystery, danger, capture, imprisonment, rescue, social issues, cholera epidemic, cyclones, tigers, and of course 2--not just one---but 2 Big love stories.

Video: Captured by Moonlight (Twilight of the British Raj) by Christine Lindsay