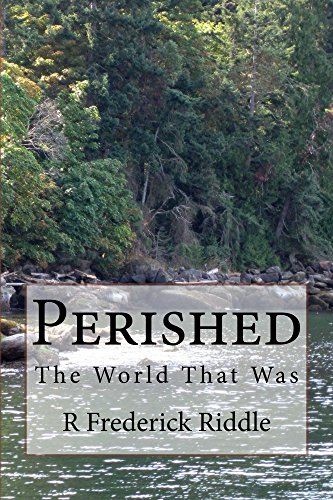 Book: Perished - The World That Was by R. Frederick Riddle

about this book: I was inspired to write Perished: The World That Was after already writing Refuge: The Genesis Chronicles and Adam's Chronicles. Both these books sprang from my own Bible devotions. Refuge was the first and centered on the great Deluge of Noah's time, while Adam's Chronicles covered Creation and the Garden of Eden.

The more I thought about it, the more I wished I had added to those two books. Therefore, I combined the two books and expanded them far more than each had been previously. With Perished, you not only get the story of Creation and the story of the Flood, but the intervening years as well.

You, the reader, get to meet, besides Adam and Noah, a number of Biblical characters. You get to see them go through the real Biblical events and a few fictional events. They touch your lives as they interact with God, as they marry and have children, and as they view the world they live in.

Perished: The World That Was and its sequel The Rise of Shem bring the Old Testament forward, painting a picture (or really a panorama) of the old world. It is Biblically correct to please the most devout Bible reader, yet weaves stories of romance and adventure that enhance the experience. Both books are for the young adult (18) and for the older adult (98) and everywhere in-between.

Video: R. Frederick Riddle with a Message for You