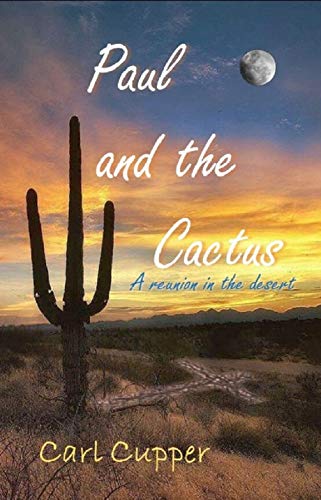 Book: Paul and the Cactus - A reunion in the desert by Carl Cupper

about this book: Since I was a child I had a strong character, some said it was actually a bad character. Strong character involves looking in the mirror, criticizing what you see there and acting accordingly. However, it is not easy.

Almost twenty years ago, I set out to make a serious criticism of myself, many of which I captured in my novel "Paul and the Cactus - A reunion in the desert." Of course, I have never engaged in practices like those that my character Pablo incurs, but I have met many people who have. Thus, I began to write a few lines listing my defects and virtues as a self-criticism. Something highly recommended even if you do not have as a goal to write a book. I was not planning to write a novel at that time.

The subtitle of the novel "A reunion in the desert" was born by accident when I was looking for certain information in the Bible for my novel "The Secret of the Dragon" that I was writing at the time. In the Book of Acts of the Apostles, I found the way to become to that self-criticism in a novel.

"Paul and the Cactus" is a reunion with myself and with God. No matter what creed you profess, even if you are an atheist, in this novel you will see yourself reflected, since we all have certain weaknesses and strengths, in addition to Faith, with which we can identify with other people.

It is true that the story is somewhat strange. Who talks to a plant? Even more, to whom does a plant respond? Despite what Pablo thinks of himself (he thinks he is going crazy), at the end of the story the Cactus reveals his identity, leading Pablo to rediscover himself.

It will really surprise you (Age range: 18 and older).

Other books by Carl Cupper (more)