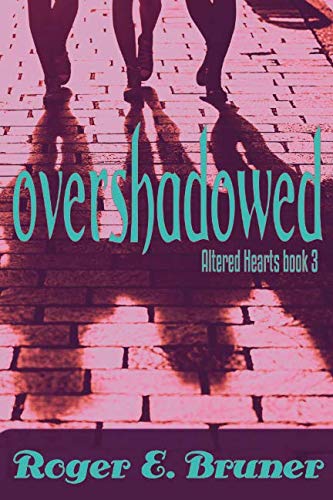 about this book: After the first two books of the Altered Hearts series, Found in Translation and Lost in Dreams, were published, Barbour Publishing discontinued their whole Young Adult line.

But readers wanted to know more about Kim Hartlinger and her friends. Only recently has another publisher taken on the task of releasing the final two books in the series, Overshadowed and The Flowers of His Field, as well as re-releasing Found in Translation and Lost in Dreams, which has been re-titled A Season of Pebbles.

Overshadowed is a bit different from its predecessors in that it's more about Kim's best friends Jo and Aleesha than about Kim. (But Kim is the protagonist of the final book.)

Poor Jo! With friends like Kim and Aleesha, who have important plans for their future, Jo doesn't know what she wants to do. She feels like her friends overshadow her. But when called upon to be in charge going on a mission trip to Nicaragua with Aleesha and her pastor's daughter, Jo learns things about herself that give her greater confidence and a sense of direction.

Don't let the fact that the Altered Hearts series was originally marketed to teen girls detract you from this series. These books have been quite popular with adults as well, especially as the characters continue to age and mature.

The cover was a special choice because of the fact that the middle shadow is shorter than those on the right and left, hence suggesting being overshadowed.