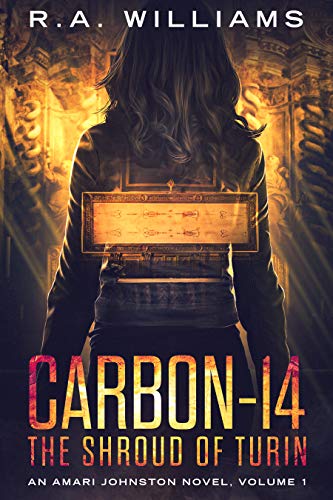 Book: Carbon-14 - The Shroud of Turin (An Amari Johnston Novel) by R.A. Williams

about this book: The Shroud of Turin is the most studied relic in history. More than 99 percent of the evidence suggests that the Shroud is the authentic burial cloth of Jesus Christ. Only one test says otherwise—the carbon date performed in 1988.

This novel is set in Tucson, Arizona, and revolves around the carbon date performed at the University of Arizona. Amari Johnston is a criminal justice major at the university, and she makes a shocking discovery about the carbon date process that could alter the fate of Christianity. She teams up with and then falls in love with Dr. Kevin Brenner, a physicist who helped carbon date the Shroud. Dr. Brenner has his own ideas as to why the carbon date is wrong, and together they work to bring their findings to the attention of the Vatican.

Meanwhile, Amari's father, a homicide detective for the Tucson police department, works to catch a serial killer who has targeted the faithful of Tucson. After his daughter makes the national news, she attracts the attention of the killer and Amari's father desperately tries to catch the killer before his daughter becomes the next victim.

This book is an excellent choice for any reader who is interested in the Shroud of Turin and for any Christian who is trying to strengthen their faith using irrefutable scientific evidence.

This novel was inspired by a Discovery Channel documentary called Unwrapping the Shroud. This documentary explores a theory proposed by M. Sue Benford and her husband, Joe Marino. This couple theorized that the carbon date performed on the Shroud of Turin was performed on a repaired corner of the Shroud that contained new fibers mixed in with old, therefore invalidating the carbon date.

Ironically, the first person who discovered and bought this book on Amazon was Joe Marino himself, who contacted the author on his website to express how touched he was that the work of his late wife and himself had inspired the novel.

The primary readers of this book would be anyone interested in the Shroud of Turin or any Christian who likes suspenseful thrillers with a romantic thread.