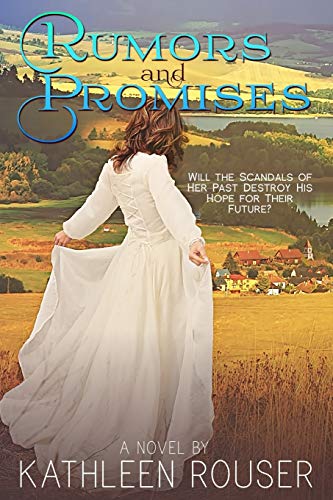 about this book: In 1900 Michigan, Sophie Biddle is an heiress on the run with a child in tow, worse the child is her daughter, who she passes off as her little sister. Running from town to town, in fear of the predatory man who fathered her child is no picnic. But Sophie feels abandoned by God and family and wants to find a place to call home where she can raise her daughter in peace.

When meddling, but handsome pastor, Ian McCormick, inquires of her past and offers help, Sophie resists, but is drawn into the loving family circle he and his sister provide. Working at the local boarding house and taking in sewing isn’t easy, but it provides Sophie and Caira with a measure of security. Ian’s suffering from guilt of a past mistake and sees Sophie and Caira as an opportunity to make up for his former error. Also starting over in Stone Creek he wonders whether he’ll ever find peace or a sense of pleasing God again.

The town gossips are only too eager to speculate Sophie and Caira’s true origins and when Sophie’s secret is accidentally revealed, both she and Ian must decide whether to stick together and face the town or lose the chance for healing and a positive future for their relationship.

When I first wrote Rumors and Promises in 2002, I called it Before the Promised Land, a story of two people starting over for different reasons and looking for healing and hope. But they’re in a town that doesn’t like secrets, where those who elevate themselves above others are only too eager to find fodder for gossip and want to tear down those they would judge.

Sophia Bidershem’s came out of creating a character of bad reputation while preserving her purity, for the Christian market. The out-of-wedlock-pregnancy had not come about by her volition, but she loves her child anyway and does what she must to take care of her. She bears the brunt of the resulting shame. Like the Woman at the Well in the Gospel of John, she is shunned by “good” society.

Jesus's association with the Samaritan woman shocked his disciples. Similarly, Pastor Ian McCormick good reputation would be tainted by friendship with a “fallen woman.” Of course, that’s where the similarities end. Jesus is sinless while Ian is a flawed man trying to start over with a new congregation because of past failings.

Regarding the issues of rape and the resulting PTSD, I've known some women who were raped and/or sexual abused and been scarred deeply, yet God has healed them in a powerful way. Sophie’s fear and PTSD are very common among victims of these crimes. I endeavored to convey these in a realistic yet sensitive way, with the worst of it "off-screen."

Another important issue in the book is how Sophie, in her love for Caira, realizes the value of her daughter’s life, despite her birth resulting from rape. 1900 was not an easy time to deal with these issues in an honest way. There were few options for unwed mothers. It was very revealing to learn about the origins of the Florence Crittenton homes, which at that time truly reached out to women and girls as an act of mercy. In writing Rumors and Promises, I learned many things, some unexpected and some encouraging. I hope readers will be encouraged to know that God can heal the worst of your past and that He wants to give you a future and a hope.

Sophia Bidershem is raped and conceives a child out of wedlock. This is an unspeakable and unheard of sin for the pious righteous of the early 1900s. Her parents order her to marry her daughter’s father.

Sophia flees her parents’ home to keep her daughter, Caira, safe.
Sophia hides the truth that Caira is her daughter and tells everyone that they are sisters. Heartwarming, and oftentimes humorous, the reader is hopeful that Sophia and Caira’s charade will not be disclosed. Sophia prays God will forgive her sin of lying and deception. God answers her pray by having her bump into Reverend Ian McCormick.

Reverend McCormick is a man seeking God’s guidance, but he hides a treasure chest of hidden hurts himself. Sophia’s knight in shining armor is flawed. Can God heal Sophia’s and Ian’s flaws that keep these two loving people at arm’s length?

Kathleen Rouser’s Rumors and Promises is a well-written historical romance that leaves the reader with a better understanding of what societies’ finger-pointers can do to a young girl’s moral. This venerable young heiress, though homeless and alone, shows us that as Jesus forgave the woman at the well—when you call upon God, He is our omniscient champion without equal!