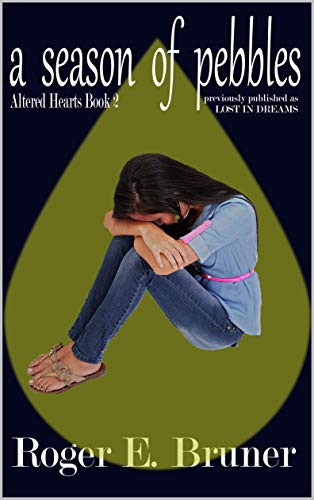 about this book: The funny thing about A Season of Pebbles is that it begins with what I'd expected to be the ending of Found in Translation. But when I realized that Found was already getting a bit long, I decided a follow up book was in order.

A Season of Pebbles finds Kim Hartlinger at the San Diego airport on her way home to Georgia after her life-changing time in Mexico. While waiting for her mother at the Atlanta airport, she tries calling several times and finally leaves voice mail. Then she learns that the worst of all possible things has happened. Her mother has died in a car crash that apparently happened while she was listening to voice mail.

Convinced that she's responsible for her mother's death, Kim develops a fatigue problem that prevents her from living any kind of normal life--she can't even go to school for a number of months.

I won't tell you any more about the story, but I will share this. When my daughter was in the eighth grade, she experienced a very similar fatigue problem. The doctors couldn't find anything wrong with her. Only through counseling did she slowly return to normal. Her mother and I have never learned what caused her problem, although we suspect it had to do with the pressure of her accelerated school program.

Reading Found in Translation first is helpful, but not required. In addition to Kim and Aleesha, this novel also features Kim's best friend, Betsy Jo, the girl who was supposed to have gone to Mexico with her.