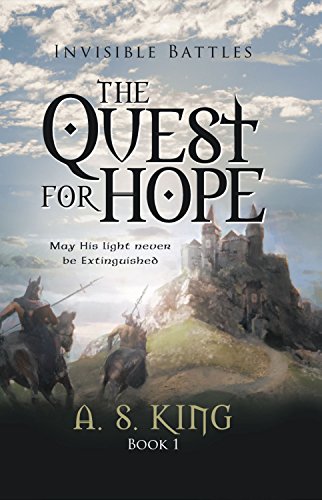 Book: The Quest for Hope (Invisible Battles 1) by A. S. King

about this book: "The Quest For Hope" is the exciting new novel that thrills as it inspires.
This book is the highly acclaimed first installment in the Invisible Battles series. Readers are calling this a major literary success. The Quest For Hope kicks off the series in style with strong characters and an exciting plot filled with unexpected twists and turns.

Humor is always present and there are many hard to miss references to well-known Biblical lessons and stories. In total, this book entertains while it teaches and inspires.

The book starts with the major characters in the new land of NOVUS. This is a mysterious kingdom packed with adventure and twists that keep the plot churning. There is never a risk of it becoming boring.

Unfortunately, NOVUS has been taken over by The Dark One who uses his power to rule over the people. Their lives are steeped in forced ignorance and misery, unable to change their lives out of fear for The Dark One.

But things were once quite different in NOVUS. Many people remember the benevolent and wise High King who sees all that happens in the land.  The truth of who he is affects everything... The King is now presumed dead by many.

The Dark One knows this memory is a threat to his power, so he works tirelessly to propagandize people into believing the High King was evil and cruel. The Dark One is rather successful at convincing his subjects that HE is the better of the two.

But there is hope. It turns out the High King is alive and well and stirring up trouble. Servants are sent out through the land to recruit rebels who will fight The Dark One.

Meanwhile, The Dark One believes he has solidified his rule of the land. He needs just one more element to finalize his control. That is Lady Aliatta.

Thus enters one of the book's most fascinating characters. Lady Aliatta is a spoiled young aristocrat whose life becomes entangled with the fate of Novus. Her quest brings her face to face with a shape-shifting apprentice and a master Knight.  She is also drawn into an ever-increasing awareness of both the visible and invisible elements of her world

"The Quest For Hope" is a powerful, well-written story of guiding values and the struggle for freedom and happiness. You will find the constantly evolving plot and rich characters to be thrilling while inspirational.