Book: The Demon Calumnius - Book One of The Repentant Demon Trilogy by Samantha Johns

about this book: An epic apocalyptic suspense thriller and a love story amid a spine-chilling scenario--the end of the world as we know it.

In this Book 1, we meet one of the fallen angels, a demon named Calumnius, who since time immemorial has been tempting and deceiving humans into hell. Conflicted and weary of the ways of evil and being a demon, he now longs for the forgiveness of God while envying humans for the love they were given so freely, and yet do not seem to appreciate. The story unfolds as he stalks a beautiful red-headed archaeologist into the dangers of ever war-ridden Iraq where she and her handsome love interest travel in search of answers to biblical mysteries at a renown excavation site. Here a mystery unfolds involving them in both dangerous evil and tender exotic situations that intensify their feelings for each other. Unfortunately the expedition ends in disaster as our heroine's lover is found gruesomely murdered. The demon who witnesses everything devises his own plan to approach God for forgiveness, which relies exclusively upon the very woman he has invested much time and energy into seducing.

This book was written after I wrote Terror in Tower Grove, which featured a demon as the evil entity. After finishing this book I wondered if a demon could repent, giving birth to the idea for The Repentant Demon. As the story unfolded in my mind and as my notes grew, it became clear that this was destined to become an epic fantasy story, thus the Trilogy was born. Though Christian beliefs are throughout, the story is really about good versus evil and love verses hate and is a story for anyone who enjoys a good apocalyptic epic fantasy with demons, angels and plenty of steamy romance. 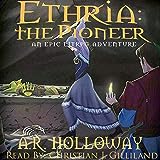