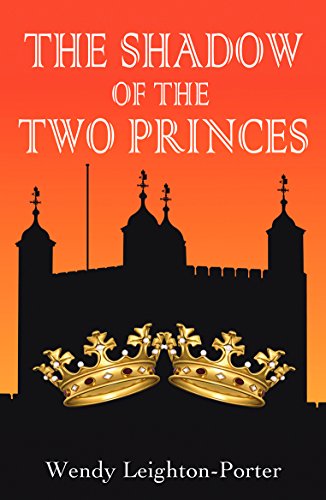 Book: The Shadow of the Two Princes (Shadows from the Past Book 10) by Wendy Leighton-Porter

about this book: Book number 10 in the Shadows from the Past time-travel series for Middle Grade readers, The Shadow of the Two Princes deals with a subject that has fascinated me for many years. Spanning a period of 30 years, between 1455 and 1485, two rival branches of the royal House of Plantagenet fought each other for control of the throne of England: the House of York, whose symbol was a white rose, and the House of Lancaster, represented by a red rose. The conflict is known as the Wars of the Roses.

In 1483, King Edward IV of York died, leaving an heir who was not yet old enough to rule independently. What followed remains one of the most unpleasant episodes in English history. The 12-year-old Edward V (although not yet crowned) and his younger brother Richard became the victims of a dynastic struggle. Placed in the Tower of London by their uncle, Richard, Duke of Gloucester, supposedly for safe-keeping, they were never to be seen in public again and their fate remains a mystery to this day. Their uncle had himself crowned King Richard III and has gone down in history as one of the worst kind of villains, having disposed of his two nephews in order to claim the throne for himself.

But what really happened to the two boys? Although it is most likely that they were murdered, their fate has given rise to many conspiracy theories over the years. There were even young men who turned up a few years down the line, claiming to be the missing princes. Even now, there are people who maintain that Richard III was much maligned and wrongly accused. The jury is still out on that one!

I wanted a positive outcome for my version of the story and decided to tweak history, giving it a happier ending. And so, my young time-travellers set off into the past on a daring mission to rescue the two princes, hoping to turn the tide of history. This is their most dangerous adventure yet and they risk their own lives to save the boys. As ever, I have filled the book with plenty of historical detail, while offering my young readers an exciting story that I hope will keep them hooked until the very last page.

“It is a good example of how to make history interesting to the young.” – THE RUBERY BOOK AWARD

“This book was filled with adventure, rich in history, and packed with excitement.” – READERS’ FAVORITE BOOK REVIEWS

“Although this series is written for children it is not dumbed down. The writing is superb and the descriptions of all that is going on etc. allow the reader to envisage things as they were.” – L. POMEROY, parent, USA

Other books by Wendy Leighton-Porter (more)