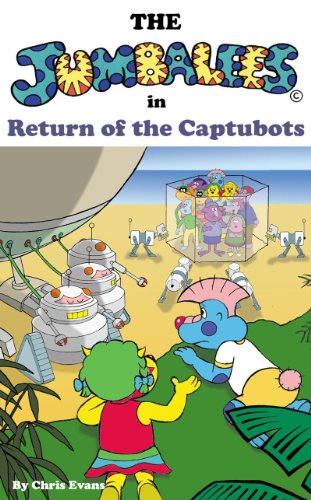 Book: The Jumbalees in Return of the Captubots - A Robot story for Children ages 4 - 8 with colour illustrations by Chris Evans

about this book: I have spent my working life as an animator of children’s cartoons for film and television. The idea for the series of books grew out of a set of colourful characters that I designed in my spare time. They were a quirky and comical combination (or “jumble”) of jungle-like animals, such as an elephant type creature with big bird-like legs and a dragon’s tail, so I called them Jumbalees! They proved popular with the people I showed them to, and I decided to write illustrated children’s stories about them.

The Jumbalees are alien creatures captured from a distant planet by the Captubots, an evil robot race. The spaceship they were being held in was struck by an asteroid and their capturepod fell to Earth, and Earth became their new home. In this story, a generation later, their captors come to re-capture them, but the young Jumbalees manage to outsmart them!

The most difficult and rewarding part of the book was doing the full colour, full-page illustrations. I referred to photographs of real jungles as inspiration for the exotic plants and colourful backgrounds used in the book.