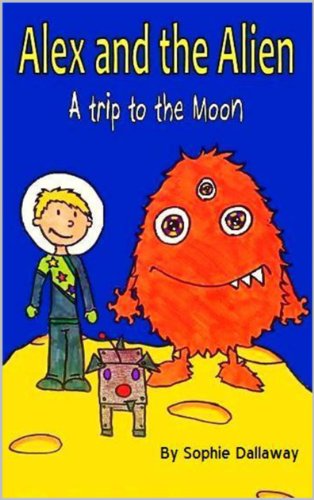 Book: Alex and the Alien - A trip to the Moon by Sophie Dallaway

about this book: A children's Sci-Fi novel about Alex, a young boy who is incredibly bored on a rainy day. He is disappointed that he is unable to go to the park but his mother promises they will go another day. He decides to create his own fun by imagining that he is an astronaut and plays in the back garden. As night time falls, Alex notices something unusual appear in his back garden: a spaceship that has broken down!

The boy discovers an orange alien, who he befriends, and invites him into his house; his parents are oblivious to Alex's new friend and so Alex continues to have with the alien.

The following day, as promised, Alex fixes the spaceship with his father's tools. The alien says goodbye but promises he will return one day. Fortunately, it is very sunny and so Alex and his mother eventually go to the park.

A novel which is brightly illustrated on every other page accompanied with short verses that create a wonderful and gripping story for children with a wide audience of 3yrs-10yrs.