about this book: "GRANDMA STINKS!" is a children's picture book told in first-person by a little girl named Emma. When Emma's mother tells her that Grandma is coming to live with Emma and her parents, Emma is so excited! But when Grandma arrives, Emma discovers that Grandma is… well, rather stinky! Emma never lets Grandma know, but she is vocal about it to her parents, and especially to the reader.

Throughout the book, Emma's various interactions with Grandma are always punctuated with a, "GRANDMA STINKS!" as Emma looks out to the reader in disgust! The reader, however, is never informed why Grandma stinks. No matter! Emma goes through a series of schemes, intended as possible solutions to Grandma's malodorous condition, but they all fail. Without giving away the ending, let's just say that Emma learns a lesson in tolerance and unconditional love.

Initially, "GRANDMA STINKS!" grew out of my desire to write and illustrate a purely irreverent children's book. My inspiration was gross-out cartoons like Ren & Stimpy, or any of the numerous other children's books on topics like farting, etc. However, as I got through most of the first draft, it became apparent that I wasn't as interested in shock value as I was entertaining young readers, while incorporating a simple lesson on humanity.

Just about everyone knows, or has known an elderly relative who smells "different". Kids express themselves more openly than adults when they encounter new, unusual, or offensive sights and smells. I knew that I could use this in an irreverent way, and the title "GRANDMA STINKS!" is as direct as one could get in that regard. The cover art reinforces the title directly – leaving no guesswork about the book's content.

The manuscript took about 3 months to write, revise, and revise again. Once complete, the arduous task of illustrating it occupied my time. Here again, adjustments to the text were necessary as I realized the role of the art as an expressive tool would take up some of the burden of the text. I also realized I was falling in love with Emma and Grandma as if they were 2 beloved relatives of my own, and I didn't want this labor of love to end.

Although the book is irreverent, it will most likely be unoffensive to most readers. Kids will enjoy chanting along every time Emma exclaims, "GRANDMA STINKS!" throughout the story. By the heartwarming end, kids will have an understanding of the book's intent, and will want to read it again and again. Even boys who are generally hard to get in front of a book will enjoy this funny tale. 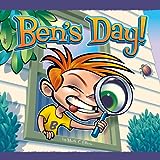