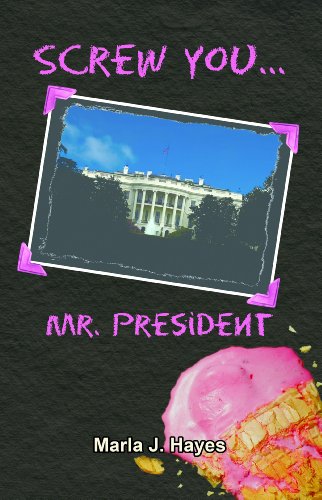 about this book: SCREW YOU, MR. PRESIDENT is a novelized screenplay, so it is a quick read. But don't let that fool you -- you will still get fully involved in the life that First Teen Meagan Geraldine Masters thinks she has been suffering through while her father is President.

Meagan picks Good Friday of the Easter Weekend to plot and scheme her way into getting even for the way she feels her father has mistreated her, using her as a pawn to advance his political career. She draws her boyfriend and her younger brother into her plans. Those poor males! Their lives will never be the same once Easter is over.

The relationship between father and daughter will be irrevocably changed too -- hopefully for the better. While the President risks his life to try and save Meagan from what appears to be a terrorist attack on the White House, she believes he is only the man who looks like the president and treats him with the disrespect she feels he deserves. She doesn't spare the White House either.

Actions and emotions entangle in a tale that reaffirms the power of love between a daughter and her father… and takes us behind the curtain of power into the private areas of the White House.

I extensively researched this story to the point that I hoped readers might actually think I had lived in the White House.

• "I have never been so engrossed in a story in a long time."

• "Her characterization captivated me from the very beginning and the amount of research put into this novel was amazing."

• "It's "Home Alone" meets "White House Down" in this zany caper that's a fun read for middle-graders who love comedy, heart, and non-stop, crazy action in a fast-paced, quick read."

• "I recommend it to any teen and anyone seeking a great gift for a teen. Adults will get a big kick out of this story, too."

• "Ms. Hayes has done a wonderful job transporting the reader into the White House and giving us an exhilarating front row seat!"