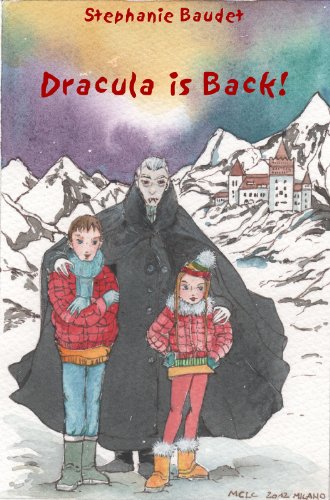 about this book: This story was originally commissioned and published by Andre Deutsch in 1999 as part of their New Library of Horror series. It was later reprinted by Back to Front Books in 2010.

Jon Harker and his step-sister, Sarah, are on a skiing holiday in Romania, when they become lost in the fog on the ski slopes. Finally reaching the road, they accept a lift from a stranger in a horse-drawn vehicle, but instead of taking them back to the village, he takes them to an old castle where a strange man has prepared a feast for them, as if they had been expected …

Jon and Sarah find themselves imprisoned and must make a daring and dangerous escape, not only from the man who calls himself Count Dracula, but from other creatures whose whispering they hear.

Safely back home, they think their nightmare is over, but with growing horror they realise that it has only just begun.

This is a story for children ten year and over, and often the book I choose when asked by children to pick my favourite book that I've written. I really enjoyed writing the scary bits!