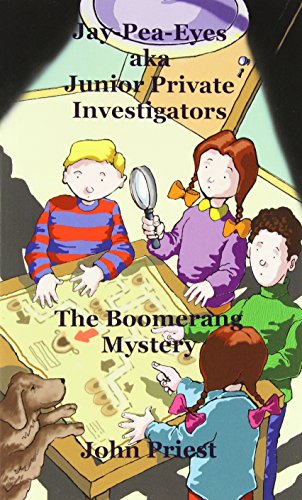 about this book: Jay-Pea-Eyes aka Junior Private Investigators. I know it's a long title but it is shorter than the original which tagged on another couple of words, 'aka JPI's'

Originally it read 'Jay-Pea-Eyes aka JPI's aka Junior Private Investigators'.

It's a whodunit/detective story for boys and girls aged around 9yrs of age. I trialled it in a Primary school and this was the most suitable age and the kids enjoyed it.

Several children go missing but after a few days they suddenly appear and won't let on where they've been.

When the sister of one of the JPI's disappears, they are determined to find out what's going on.

If I mention here where I grew up and where I played as a child with my friends it would give too much away, so I'll just leave it there!

The JPI's have a dog called Alfie and you can see him on the front cover of the book. He is a chocolate labrador and belongs to my daughter. During a Library workshop I showed the children pictures of Alfie and hidden in the photos were clues they had to solve. They all liked that and thought Alfie was great.

The children who have read the book in the Library and School workshops really enjoyed the book.

I hope you do too!