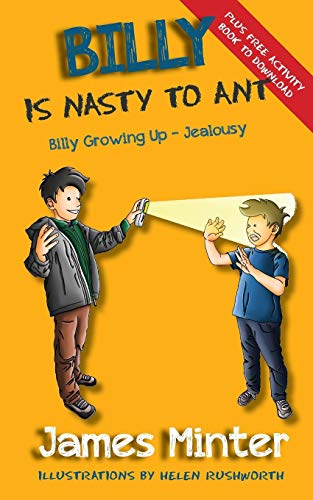 about this book: Jealousy is based on wanting something for ourselves that someone else has. As children, we learn by making comparisons with others. Jealousy usually involves another person and seeing them with what we want but do not have. It can lead us to harm and bring unhappiness to the other person at whatever cost. These emotions can also generate feelings of guilt and shame, as we know deep down that we are actually harming the other person. However, jealousy only harms the person who is feeling it.

When Billy's best friend Ant wins a school prize, Billy can't stop himself saying horrible things. Rather than being pleased for Ant, he is envious and wishes he had won instead. Billy thinks he deserves the most attention and a prize because he believes he is the best student. In his mind it isn't fair and he's afraid he will lose his popularity as Ant becomes the centre of attention. As things progress, Billy blames Ant for how he's feeling and wants to get his own back.

"Billy is a likeable chap who learns that being nasty to his school friends is not the answer to his problems.

• These beautifully produced books provide a wonderful educational tool for parents and teachers, based as they are on the principles of Value -based-Education." — Toni Simms

Other books by James Minter (more)