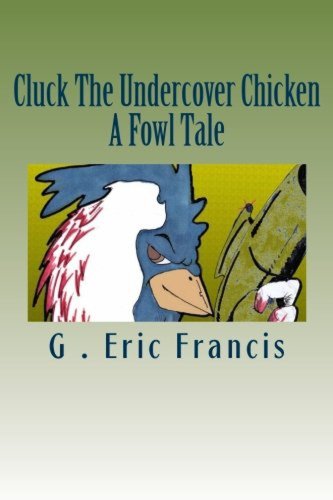 about this book: When my son was about 6, he always asked me to read him a book before bed.

To be honest, it wasn't my most favorite thing to do, since a lot of the books that I read to him bored me to tears.

One night as I tucked him in, I stood up to go to the bookshelf in our hallway to grab a book. Then I stopped in my tracks, shook my head, and walked back to his room.

An idea popped into my head, and I decided to see if he would like it. A couple of hours before, I had a really good chicken dinner my wife made, and since its deliciousness was still on the tip of my tongue, I came up with a character based on my, well, dinner.

That is how "Cluck The Undercover Chicken" was born.

I have written 4 books, and while I love them all for different reasons, "Cluck" was the one I hoped to truly launch my career. It isn't like other books for kids (I wrote it with 8 to 14-year-old kids in mind). Breaking the "4th Wall" I brought the author (that would be me) into the story, acting as Cluck's main foil as he tried to save the world despite his arrogance. It made my son laugh hysterically, and after my wife heard me tell the story a few times, she suggested that I write a book.

Cluck is a combination of every hero I watched on the big screen as a kid, with a (un)healthy dose of confidence added in. It was written so that not only kids would enjoy reading it, but an adult would enjoy reading it to him. Now some folks have not gotten that, which I knew would happen. But for those who did, it was a fun and funny read, and I am rather fond of it.

It's a story about a rooster who can't stand being called a rooster, who also spends his time arguing with the writer of the book, while trying to save his planet (made of a mutated egg shell) from a crazed hen who wants equal rights...as long as she is absolute ruler.

And you think you have problems.

"Cluck" is a book that middle aged-kids (and perhaps some adults) will enjoy. An agent with "The Eggency", Cluck is the best at what he does. Sadly, his ego is as massive as his skills.

Besides being blinded by his arrogance, Cluck is helped along by "ST", the writer of his adventures and a voice only he can hear. While this causes some to question his sanity, together they make an uneasy, but successful partnership.

When a hen named "The Fan" (named because she has a deadly hand fan with her at all times) forms a worldwide cult in order to take over the planet, it's up to Cluck to toss a feather in her plans...if his ego doesn't trip him up first.