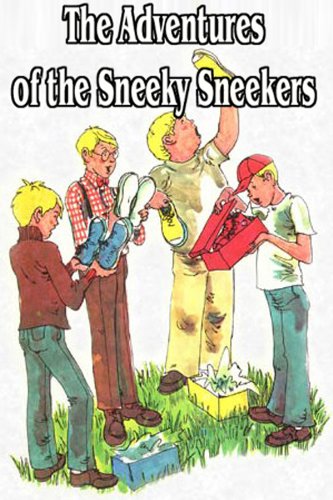 Book: The Adventures of the Sneeky Sneekers - Trilogy by Mike Jaroch

about this book: Many of us created special places and people with our imagination as children. However, how many of us have turned those childhood fantasies into reality? Well, Mike Jaroch did when he created "The Adventures of the Sneeky Sneekers." You see, as the most imaginative child in a family of thirteen children, Mike organized a secret club with his three younger brothers, Chipp, Randy, and Rod. Through the powers of their magical sneakers, their fantasies became real. Years later, Mike began telling his own children about "The Adventures of the Sneeky Sneekers." Julie and Michael loved the stories so much that Mike decided to bring the Sneeky Sneekers to life in a series of children's books. Now, thanks to the magic of eBooks, children can once again enjoy Mike's creation!

"The Adventures of the Sneeky Sneekers-The Trilogy" is storytelling at it's best. Children can identify with the Sneeky Sneekers. In a time when constant viewing of television acts to stifle a child's creativity, the stories promote a world where the fantasies of super powers-only to do good-come real for four brothers. The stories will encourage a child's imagination. They have been helpful for children with reading problems and appealing for the advanced younger reader. The stories are wholesome, family-oriented, and each adventure serves to teach a good lesson.