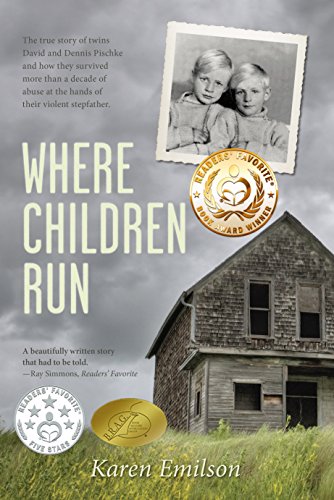 about this book: Twins David and Dennis Pischke came to me when I was a newspaper reporter and asked me to tell their story. Response to the article was so positive and with encouragement from CJOB radio host, Peter Warren, the twins and I decided to turn the story into a book. This was back in 1995—at the very beginning when adult survivors began speaking publicly about their abusive childhoods.

"Where Children Run" became Canada's counterpart to "A Child Called It," by David Peltzer in the U.S. Here in Canada, people confused our titles all the time, probably because they were released the same year, the titles are similar and the stories are both about adult survivors named David—and their last names both start with the letter P.

I promised David Pischke before he died in 2004 that I'd do everything possible to keep his story, "Where Children Run," in print so that the plight of the abused child will never be forgotten. Thanks to ebooks, it is now possible to reach readers all over the world. That is a blessing that would please David Pischke very much.