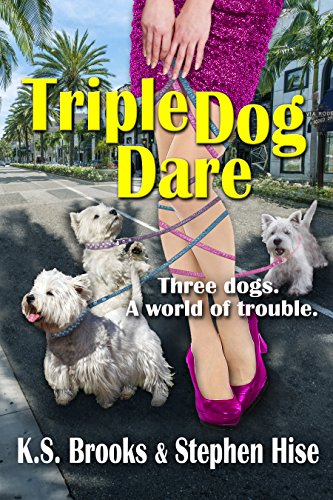 about this book: Bashful Stuart Hockersmith’s problems are only just beginning. With legal proceedings looming, destined to embarrass him and his well-to-do family, he must retrieve his prize Westie the world has now come to know as Lo-Lou – a famous children’s book character. Gifting the pup to lovely Bianca Jameson – the woman he secretly loves - was in violation of kennel club rules, and Hockersmith’s arch nemesis, Gerald Wingate, means to make certain Stuart is held accountable.

Meanwhile, Bianca discovers that her fiancé, the godlike Lars Lundgren, has spent all the money from her book sales – driving her to the edge of foreclosure and bankruptcy. In reality, all she has left is Lo-Lou, and she’ll need him to turn out another book in order to satisfy a deal she didn’t know Lars had made with her publisher. What she doesn’t know is that Lars also needs Lo-Lou for a secret movie deal.

At the end of her rope, Bianca escapes from Lars and accidentally teams up with former co-worker and investigative reporter Terri London. Terri harbors immense resentment towards Bianca from their past interactions, and agrees to help out – but with ulterior motives.

A light comedy with a hint of romance and three adorable dogs by authors K. S. Brooks and Stephen Hise.