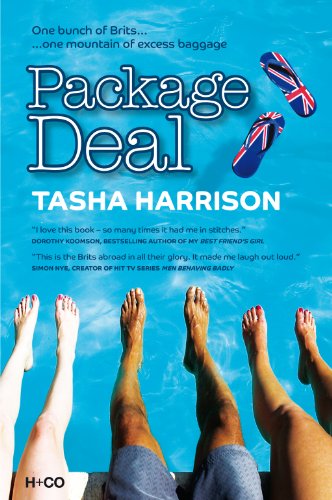 about this book: Package Deal is about a group of British holidaymakers whose lives become entangled on a fortnight's holiday to the Greek island of Kefalonia. Previously famed for the wartime romance between Captain Corelli and Pelagia, this stunning island now sees a different kind of invasion - the type that arrives by Easyjet from London Gatwick and thankfully leaves two weeks later.

Among the bundle of characters are Mia, an attractive singleton who fends off unwanted attention in order to focus on the real reason she has come to Kefalonia. Middle-aged mums Caz and Babs are there on a girlie holiday, having left their families behind. Young lads Steve and Craig are hoping, naively, to get laid. Frank and Margaret are celebrating their 50th wedding anniversary while heading for divorce, while Simon is there on honeymoon, without his bride. And then there's the apartment complex caretaker/local lothario Dimitri, who's desperate to escape the very same paradise his guests have been dreaming of.

The idea for Package Deal came to me while on holiday in Kefalonia several years ago, before I had children. The characters of Caz and Babs were inspired by people I met on that holiday, as was the character of Simon. The real Caz and Babs seemed loud and annoying at first, but after an evening spent chatting to them I found myself really warming to them. That prompted the idea that the people you meet on holiday aren't who they appear to be at first glance.

• "I love this book - it's an incredibly funny, feel-good page-turner." Dorothy Koomson, bestselling author of My Best Friend's Girl

• "This is the Brits abroad in all their glory. It made me laugh out loud." Simon Nye, creator of hit TV series Men Behaving Badly