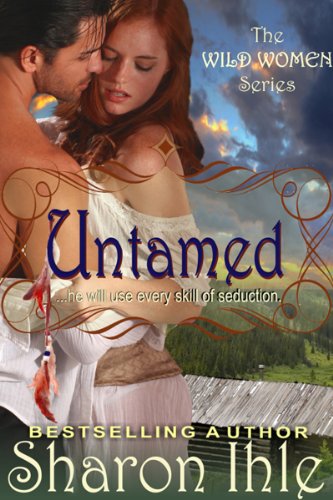 about this book: I was inspired to write this book during a trip to Montana where we visited the Lame Deer Northern Cheyenne Tribal headquarters and the St. Labre Indian Mission. I was deeply touched by the difficulties the Northern Cheyenne faced then, and now. I had to write about what I'd learned and quickly came up with a half-breed hero, dark-haired, dusky-skinned Daniel McCord, himself part Northern Cheyenne.

All Daniel wants is to help his people and right the wrongs that have been done to them. To that end he accepted a job at the Tongue River Agency, set up to help those very Indians. It was while he was showing the tribe how to work cattle that his leg was broken, and his Cheyenne friend, Long Belly took him to his cabin and set the leg. Since Daniel was virtually helpless, Long Belly took it upon himself to go to Miles City where he'd heard a man could buy women, and settled on securing one as a maid for Daniel. The place he was thinking of was a 'pleasure place' where women were 'rented' not sold. There he discovers Josie Baum, a red-haired beauty who was perfect for the job. Since the Madam of the palace would not sell one of her girls, Long Belly simply kidnapped Josie and whisked her off in the night.

Josie had lived on a Montana ranch with her step-father and his fourteen sons. Her mother died during the birth of her last child, and Josie became the woman of the house. In other words, the elder Baum's slave. Burdened with the never ending work of keeping house for this man and the children, she vowed never to marry or have children of her own. Still, she was curious about kisses and such, and when caught sampling the lips of a neighboring rancher's son, the hard-headed German drove her to town and dumped her on the steps of the Pleasure Palace, proclaiming her as a Jezebel. The proprietor of the Palace took pity on Josie and restricted her work to cleaning, not entertaining the visitors. Josie was moping the floor when Long Belly arrived welding his ax, and then dragged her off to a cabin deep in the woods.

From there Untamed is a story of how two very stubborn people set in their ways, come together as one to form a united front. Like their lives before, it isn't easy, especially for Josie when she discovers that Daniel has twin sons he intends to move into the cabin. This alone almost causes her to run away, but she has nowhere to go except back to the Baum Ranch where she would surely be welcomed. Yearning for a freedom she's never known, she tricks Daniel into marrying her so she can get a start at raising cattle, an enterprise she sees as the ticket to her coveted freedom down the road, and slowly discovers that she's come to love him.

• "UNTAMED will give you hours of enjoyment as you read this story full of wit and humor from Sharon Ihle. It's a highly recommended page turner for your keeper shelves."

• "I was thrilled throughout the whole book. I loved the people, the plots, the Indians , oh I just loved it all.!"