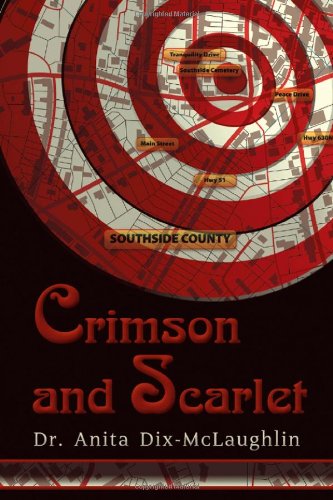 about this book: Crimson and Scarlet is about the challenges of life, personal hardships, and occasional victories of the residents of a small southern town. The genesis of each family's history depicted through their current day lives. Crimson and Scarlet delves below the surface to expose the reasons life has been so hard on so many.

Crimson and Scarlet is filled with humor, nostalgia, and many twist and turns, taking the reader through 4 generations of Southside history, culminating in the shocking outcome including solutions to disappearances, murders, and generational curses.

The readership for Crimson and Scarlet includes: Male and female (it is not Chick Lit), Young Adult, Adult, Christian, Multicultural, Mystery, and general fiction readers. I would recommend anyone who enjoys a good read to pick up Crimson and Scarlet.

I wrote the initial story from beginning to end in 7 days. I typed my fastest, and as so many authors say, "the book wrote itself." On the other hand writing and filling in the details of the town and histories of residents, editing, locating an agent and publisher (in the changing market), continuing to re-write until it was released, was a 10 year process.

I designed the book cover, just as something to place outside of the manuscript when I had a couple of my family and friends read it. When asked by my publisher if I had any ideas for the cover, I gave them my temporary cover and they liked it. I felt that with the outcome of the story the cover in retrospect is a great clue to the secrets covering Southside.

The hardest part was writing in dialect. You cannot see the errors, and once you reach the limit of grammatical errors, Word gives up, and literally shuts down. It was funny when it gave the final message that there were too many issues to address. I wanted to write it in the dialect of the town's people, so that you would literally get to hear their voices. Older residents spoke in a particular way, and as times changed so did the dialect. I felt the reader would have a more rewarding experience hearing their voices.

I did not have to do any additional research because I am in ministry and was able to bring out the underlying message from my own ministerial studies. I did have to build a timeline, to keep track of the births and deaths of the town's people and to keep the chronology of the pop culture mentions in context to the times.

I learned perseverance from writing the book. There were many times when I questioned continuing to look for an agent. I kept coming back to the speed in writing the initial beginning to end draft and knew that I did not write this book. And that someone needed to learn the lessons of Crimson and Scarlet.