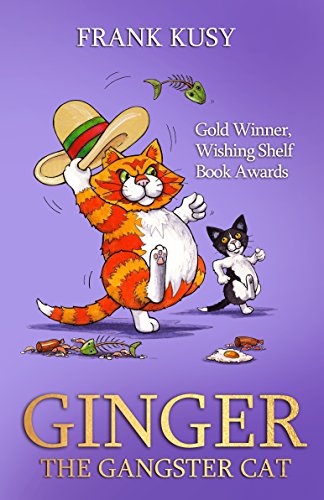 about this book: When fat, scruffy Ginger meets poor little woebegone Sparky - the cutest cat in the universe - he sees his chance for glory. "Nobody gives me nuffink!" has been his complaint, but Sparky is "luck on a stick" and Ginger takes him to Barcelona to score a whole lorry-load of tasty tapas treats.
Ginger also has a date with destiny. After 150 years, and who knows how many of his nine lives gone, he is going to meet the 16 gangster cats who ruined his last one. And he's out for revenge.

'Ginger' came into being when my wife and I lost our little cat Sparky for three whole days. We were so relieved to find him again that we began imagining what would have happened if he had NOT been found. Oh yes, he would have been catnapped by an evil orange Fagin of the cat world, wouldn't he, and put to work as some kind of pussy Oliver! As the plot evolved, we went to Barcelona, where the final denouement occurs, to see where the 16 gangster cat who have plagued all 9 of Ginger's lives might have lived. Imagine how surprised we were to find that there were no cats on the street...they were all contained in a prison camp with searchlights and high fencing! The big breakout scene, engineered by Ginger's old fight club mate Scampi, and the ensuing climactic cat fight over a giant box of tasty tapas treats, was born...