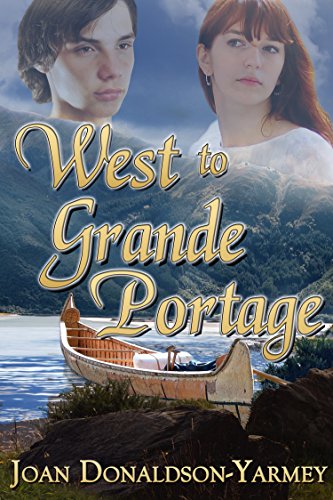 about this book: Phillipe Chabot is fifteen years old in 1766 and his greatest desire is to be a voyageur like his Uncle Pierre. At his sixteenth birthday party he is told that he has been hired by his brother-in-law to paddle west from Montreal to Grande Portage as part of his merchant house's the fur trade brigade. He is overjoyed at being a voyageur.

Jeanne is Phillipe's cousin. She volunteers in the hospital and is in love with the clerk, Andrew, who works for Phillipe's brother-in-law. The clerk however, talks about returning home to England when the brigade returns to Montreal in the fall.

In May the hundreds of canoes from various merchant houses gets ready to leave. Andrew, sitting in one of the canoes yells at Jeanne to marry him in front of the family and friends who have come to say goodbye to the men. She accepts amid much cheering.

Unfortunately, disaster strikes the brigade as the men paddle the rivers, make their portages, and get onto the sometimes violent and unforgiving Lake Superior. In Montreal, the city is ravished by a fire. Jeanne and many other Montrealers fight the fire but some perish before it is extinguished.

This is the second book in my Canadian historical series for young adults/adults. Canada has an exciting, boisterous, and rowdy history and I want to tell people about it. Also, since many of the men who came over to work in the fur trade were in their teens, Canada was basically built on their hard work.