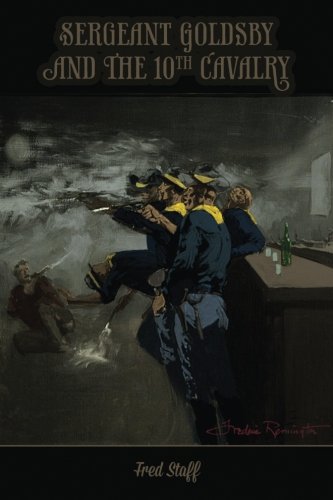 Book: Sergeant Goldsby and the 10th Cavalry - The Worm Turns by Fred Staff

about this book: THIS NOVEL IS NOW IN THE PROCESS OF BEING MADE INTO A MAJOR MOTION PICTURE. IT IS THE FIRST OF TWO BOOKS. THE SECOND IS THE MOST COMPLETE STORY EVER WRITTEN ABOUT CHEROKEE BILL, THE MOST FEARED BAD MAN IN INDIAN TERRITORY. HE WAS GEORGE GOLDSBY'S SON AND THE CONTRAST BETWEEN THESE TWO IS AMAZING AS WELL AS GIVING THE READER A DEEP LOOK AT WHAT WAS TAKING PLACE IN THE MOST VIOLENT PLACE IN THE US DURING THIS TIME.

This historical novel is the story of a man who escaped from slavery at the battle of Picket's Charge. He worked for the Yankees until the end of the war and then went back to his family. He soon learned that he would probably be hung if the citizens found out he had worked for the North.

He fled to Indian Territory where he married and later joined the newly formed 10th Cavalry.

He was a hero in many of the famous battles that the 10th was involved in and also helped in building many of the Forts that still stand and operate today.

Frederic Remington rode with these men and had great respect for their dedication to their work. REMINGOTN sketched the cover of the book and said, "When the story of the West is told this event must be a part of it." I had alread written the details when I found the sketch.

The reader will be amazed at all of the events and progress these brave men did, while continually being treated as second class people.