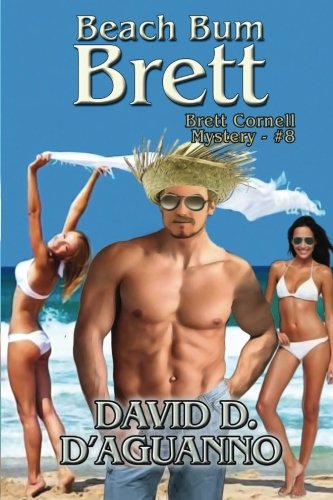 about this book: The origin of this book lay in a casual conversation that I was having with a friend. Having mentioned that, with the summer beginning to end, I was feeling bored with everything (even the beach!), I was rather startled when my friend suggested that I write another Brett Cornell novel. I'd just finished writing two others, and so, I figured," Why not?"

If my Brett Cornell series of comedy-mysteries could in any way be compared to a symphony (bear with me here), "Beach Bum Brett" would be the scherzo movement, i.e. it's the shortest book of the series, deals with Brett (mostly) having fun while vacationing at the beach, and is the least profound of any of the other novels, if that's at all possible.

Of course, there's a murder. Plus, there are the usual ingredients: gorgeous, oversexed girls who are dying to throw themselves at Brett, hostile tough guys who want to knock him out, and a murderer who wants to see him dead!

As with all my other books in this series, readers who would enjoy this one would have to be willing to cut Brett some slack for the way he treats the other characters in the book (it's only fiction, after all), but -- most important -- they'd have to have a sense of humor. That goes without saying, I think.