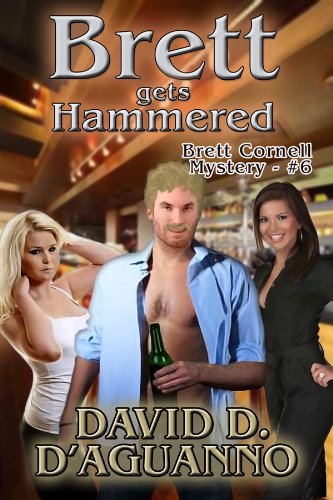 about this book: Starting with its rather unique title, this book seems to have ended up being considered the funniest one of the whole series, if positive feedback I've received from various readers is any indication of its comedic appeal.

In light of some of the events that occurred in the novel immediately preceding this one ("Brett Enters the Square Circle"), our hero/anti-hero has sought temporary relief from his troubles by drinking even more Heinekens than usual, thus leaving himself in a vulnerable state when confronted by various characters he meets up with during the course of this story.

As with all the other works in this series, this one can be fully appreciated only by those readers who are willing to surrender themselves wholeheartedly to Brett's warped but (I hope) entertaining way of looking at things, and who are not easily offended by a few minor instances of racism, sexism, homophobia, etc. that Brett occasionally displays. (Consider the source, right?)

I do want to point out that, while the predominant mood of this story is light and humorous, there are a couple of instances where I strove to dig a little deeper into what makes Brett both an unscrupulous bastard and, at the same time, a man who's as uncertain as the rest of us as to where in his life his actions will eventually bring him.