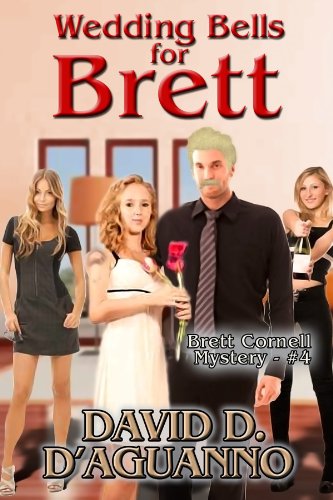 about this book: Although I have my own personal favorite characters in all of my books, I feel that this particular novel is noteworthy for featuring two characters the creation of whom I happen to deem quite successful.

One is Daniel David Densen. I deliberately chose to depict this character as chipper and upbeat so as to create numerous humorous situations in which these personality traits become particularly irritating to Brett, who has no patience when it's somebody ELSE who's making the wisecracks.

The other character I am particularly fond of is Pamela Trank for whom I believe I was able to build up quite a bit of sympathy throughout the course of the novel. In fact, if Brett could be considered the least bit normal and mature, Pamela would have been a potentially ideal partner for him.

Then there are re-appearances of a few characters who figured in the plots of previous books in this series, Lieutenant James Wilson of the Homicide Division of the Birchwood Police Department being one of them, and Officer Sean "Big Bull" O'Rourke being another.

In addition, Officer Doug Petrie and his rookie partner Wes Lomax (who both appeared quite briefly in the third book in the series, "Brett Always Wins") also turn up in this book and will actually become important characters in the next book in the series ("Brett Enters the Square Circle").

Again, let me reiterate that this book can certainly be read as a stand-alone novel, just as all the other books in the series; and I need hardly point out that, in this one, Brett comes across as particularly ornery and unscrupulous (for what it's worth).