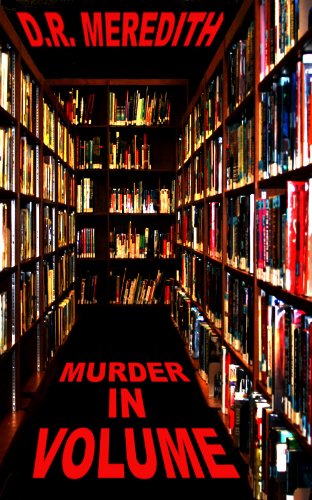 about this book: Berkley Prime Crime wanted me to write a mystery series that featured a a bookstore. I agreed that I had an idea or two that might work and submitted a synopsis featuring the Time and Again Bookstore and the mystery readers discussion group that held their weekly meetings in the store's cozy reading area. The amateur sleuths were two senior citizens: Maude Turner, a retired schoolteacher, and her widowed brother-in-law, Victor Jamison. Maude is a feisty, take-charge woman, and Victor just tries to keep her out of trouble. This pair appeared in two of my short stories: WINDKILL and ONE STRIKE TOO MANY.

Berkley vetoed the idea of using Maude and Victor. No aging senior citizens if you please. I could see the series circling the toilet bowl bound for oblivion, and desperately wracked my brain for an alternative to suggest to the editor who was patiently waiting on the other end of the phone line. Just then my short, cute, redheaded daughter, Megan, a student at the University of Texas at Austin, who was finishing her degree in archaeology, and was contemplating doing her Masters' degree in Forensic Anthropology, walked through the room. The metaphorical light bulb flashed above my head.

"How about an unemployed forensic anthropologist who works at the Amarillo Public Library and is a member of the mystery discussion group. That would add a little verisimilitude to the amateur sleuth," I babbled to the editor. "Her name is Megan--Megan Clark," adding my grandmother's maiden name to my suddenly three dimensional character. "And her sidekick is"--I hesitated as I searched my imagination for inspiration--"a Curator of History at the Panhandle-Plains Museum in Canyon, and a professor of western history at the university, who gives seminars on"--another hesitation, another search of my feverish imagination--"Custer's Last Stand. His name is Ryan Stevens and lives next door to Megan and has known her all her life. He is widowed, the father of Megan's best friend, and a-a closet reader of Westerns." (My God, but I was on a roll). "He and Megan are members of the discussion group and she is always finding dead bodies. Murdered, of course," I added. "The body, not Megan."

Berkley bought the proposal and the Megan Clark series began with MURDER IN VOLUME in which Megan discovers a murder victim. By the time the book is published Megan Clark has undergone some refinement. She is an unemployed paleopathologist, meaning she does autopsies mummies--except there are no mummies in the Texas Panhandle, so she spends her off-hours as an amateur sleuth investigating the murder of the latest body she happens to stumble over. Aided by a group of eccentrics in the discussion group, and ignoring the dire warnings from Ryan that she would end up in jail for interfering in a police investigation, Megan tracks murderers with all the tenacity of a bloodhound. This is a humorous series meant to entertain those who like amateur sleuths. Those interested in realistic mysteries need not download.