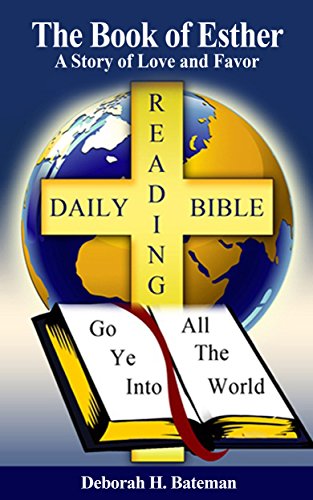 Book: The Book of Esther - A Story of Love and Favor by Deborah H. Bateman

about this book: The Book of Esther: A Story of Love and Favor is a Daily-Bible-Reading study of the book of Esther by: Deborah H. Bateman. In the book of Esther, Esther's parents died when she was young. She became an orphan and who was adopted by her cousin Mordecai, a devout Jew. Even though Esther was a Jew, she finds love and becomes queen of the Persian empire. Through a series of events God uses Esther to save her people after she and the Jewish people spend time in fasting and praying to God. The Jewish holiday Purim is established and has been celebrated since the days of Esther. The Book of Esther is a big part of the Jewish celebration every year.

I love the story of Esther. You can see God's favor on Esther's life throughout the story.

I hope through reading The Book of Esther: A Story of Love and Favor you will see how God not only works in Esther's life, but how he works in your life also. I hope you enjoy the book.