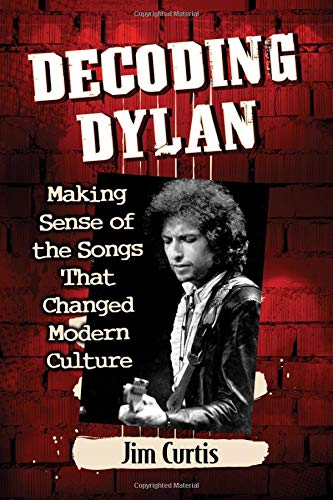 about this book: A lot of people are confused about Bob Dylan, or have just given up on him. "Oh, he's from teh sixties," people say7. "His songs are too long and confusing," people say. But those same people may wonder why he received a Nobel Prize for Literature in 2016.

Well, people don't need to wonder any more, because I've explained what Dylan did in the sixties, and how he revolutionized popular music. I called the book "Decoding Dylan" because people do think that he wrote his songs in colde that not everyone can understand. And the key to breaking codes is pattern recognition. Sure, Dylan is a genius--at least a lot of people believe that--but he's not the first one in history. There are lots of markets of creativity such as birth order and ethnicity that help to explain him.

And indeed Dylan was a radical in the sixties, but in cultural terms, not political terms. What was radical about him was his openness to the amazing art scene on New York ,where he learned to appreciate painting and modern art. In "Decoding Dylan" I show that his most important mentor and role model was not Woody Guthrie, but Pablo Picasso. None of the many books on Dylan say that!

In about 1964 Dylan left political and the civil rights to express his mystical visions in what I call in great trilogy of songs, "Mr. Tambourine Man"; "Desolation Row"; and "Visions of Johanna." These songs are united by their shared theme of transcendence.

And, finallky, Dylan is important because of his affinities with two other Jewish geniuses, Barbra Streisand and Woody Allen. All three of them have had spectacular careers by incorporating tradition in their work.