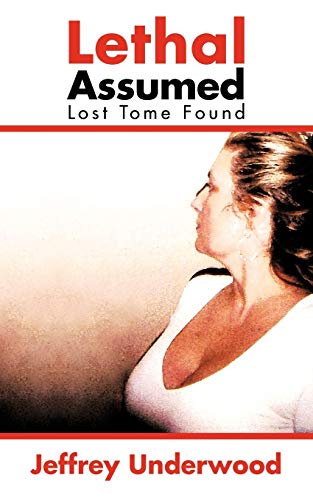 about this book: Lethal Assumed; Lost Tome Found is all about the present day discovery of certain fantastical possibilities that continue the engaging saga from my first book, Forbidden Tome; Hansel and Gretel's True Tale. Lethal Assumed begins in the here and now of Seattle, Washington on the lovely Puget Sound with a young ballerina totally smitten with her ballet company's director and maestro. She is Gisell in the ballet of the same name and she also has taken a chance by becoming intimately involved with maestro Marius. Friends are suspicious of their involvement and caution Amanda, the beautiful young dancer, to find out why he has some habits that are compellingly odd. A mysterious photograph is found by Amanda's dear friend, Valery. And suddenly the frightening escapade is on for Amanda to find if her heart has deceived her and just what Marius' history involves. She has to travel to Stuttgart and enter the Black Forest in Germany to unravel what elevates into a dangerous, possibly lethal trek. The trio, Amanda, Valery and a new found friend, Jurgen, are crushed by fear but fascinated by the pull of the amazing past that Marius has lived. This past of his is entwined with the past of the characters from Forbidden Tome. It asserts the reality of the existence of vampires, werewolves and Hansel and Gretel.

Do they survive their search? Do they accidentally stumble upon the lost Tome whereby Marius offers up the surreal vision of his dark and compelling life. Is he that creature that has lived life infinite? And bloody? What does this bode for Amanda? The world? The dawning of awareness of the solid truth of evil incarnate in the form of the legendary vampire?

The legend has revealed facts that make one peer over their shoulder as shadows hover and deepen as the sun strikes below the horizon. Tremble in hopes that their will be new dawns for each and everyone in this book.

I had to write another book after the first because writing is now in my blood. And there was no way that I could leave the reader wondering forever about the outcome of characters in the first book. Everything told me that the saga was meant to go on.

As I wrote Lethal Assumed, there was a growing emphasis on factual aspects being injected into the story. Accurate history was built into this book where it there had been little of that in the first. As I delved into that history for Lethal Assumed, I have now become fascinated by all history. So there is a third and a fourth book forthcoming soon in regards to this epic; totally of spice and historical fiction in each. It will evolve into an epic about the origins of vampires, the movement from one historical occasion to another and some significant questions probed regarding the meaning behind the existence of all who draw breath.

It is a book that engages with the facts of sexuality as they are, not as we conceive of it in our fantasies. It is not hidden nor shameful. It is presented as spice that binds individuals together in a loving embrace. I am tired of sexuality, intimacy and love being cloaked in shame, secrets and ignorance. So, in this book, love and the mechanics of love are gloriously rendered without shyness towards detail.
This book came to me rapidly. And it should appeal to an entire cross section of readers. The spice is wonderful, readers can identify with the characters who are very engaging, there is a slowly resolving mystery for those who wallow in complexity, there is danger and a foreboding aspect, themes big and small abound. I think this book would appeal to most everyone once the reader opened the first page and began absorbing the first chapter.

The title has much to say about the deception of stereotypes, the destruction that irrational fear can bring and the perpetual battle between good and evil.

The cover is a photograph of my muse. And I modeled one of my characters loosely after her. She is looking off into the distance with thoughts unknown. Is she apprehensive? Is she afraid? Is she pondering what will be? Does she see the shadow of Marius in the distance?
This book flowed in the writing of it. I felt it and wrote it. The research regarding Germany, the Black Forest, the Grimm's Brothers, Cuckoo clocks, Herman Hesse's town of Calw in the Back Forest, the history of Marius Petipa, of ballet and theatre in St Petersburg was quick and a pleasure to unearth.

I learned from writing this book, and all of my books, that there is a pleasure and satisfaction in creating something of your very own, something that has significance in the way of expressing the themes and opinions of the author all sandwiched within the frame of fun fiction and sexy entanglings.

As a last word, those who read this book, will see that blood, gore and guts is not what everything in this world is about...even when vampires are involved.

Let Marius' fangs sink into you as you fall into the puzzle that is Lethal Assumed.