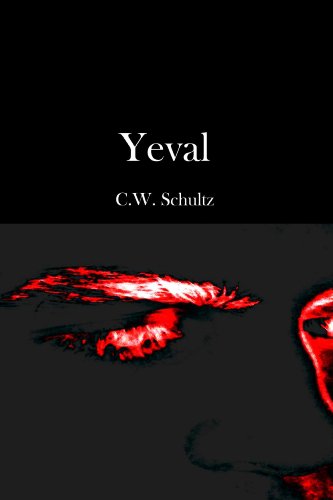 about this book: "YEVAL" is a novel about Randy Mulray (a depressed, guilt-stricken, mentally unstable and self-hating drug-dealer) who uses violent visions (showed to him by an imaginary monster named Yeval) to stop a serial killer as a way of paying his debt to society.

C. W. Schultz's debut novel is a chilling, disgusting, traumatizing, and even a morbidly-hilarious story of self-forgiveness and self-understanding, and a witty satire on the glamorization of violence in entertainment.

As a teenager, the author found himself in the middle of many debates about violence in entertainment that were a hot topic in the late 1990s. While his stance on the subject is somewhat neutral, he has always felt that any negative outcomes on the subject was more the result of tone and sugar-coating and less about the content itself, which inspired him to write a black-comedy that drew a thick line (and, ironically, sometimes a very thin line) between when things were supposed to be funny and when things were supposed to be serious.

Writing is something that has always come naturally to Schultz, and in many ways is a form of therapy for him. The development of "YEVAL" was a way for him to come to terms with the fact that nobody is invincible—something that many people don't often think about or appreciate. Therefore, in many ways, he kind of wrote the novel for himself, and not for a particular target audience. However, both male and female readers have responded positively to "YEVAL".

The story started out as a screenplay while Schultz was studying film in November 2005, but due to budget and creative limitations that often come with filmmaking, the story was eventually turned into a novel and published in July 2007. Throughout its numerous changes from screenplay to novel, the title has always remained "YEVAL"—named after the story's primary antagonist, whose unique name is the backward-spelling of the Church Of Satan's founder Anton LaVey.