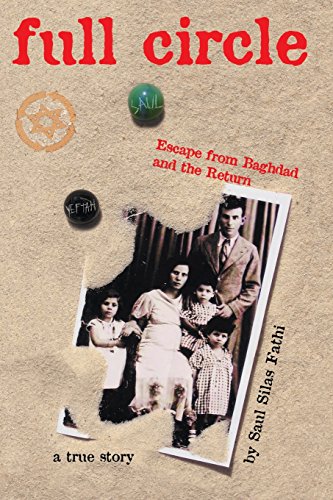 about this book: Full Circle … Chronicles a prominent Iraqi Jewish family's escape from persecution through the journey of one family member: A 10-years old boy who witnesses public hangings and the 1941 Krystallnacht (Farhood) in Baghdad. When the Iraqi army returned from the war with Israel in 1948, defeated and humiliated, they tried to appease their Muslim population by blaming their defeat on the 'Jewish Zionist spies'. They began compiling a list of rich and prominent Jews, looting their possessions, jailing them and hanging many of them in the main public square. My father took me there once to witness one of these hangings. Details can be found in my book.

After a harrowing escape from Iraq through Iran, this boy begins a life-long search for meaning and his place in the world. His journey takes him to the newly-formed State of Israel, then to Brazil and finally to the United States. He joins the U.S. Army and serves in Korea and returns to a fascinating career in three Fortune-500 companies. Following September 11, 2001, he volunteers to work for the F.B.I. Genre: Youth and adult, anyone interested in the history of the Middle-East, the Jewish people, and Sephardic life under Islam.

Full Circle: Escape from Baghdad and the return

Gripping! An intriguing story of a Jewish childhood in an Arab country. The world knows very little of this 2,600 year old Jewish Community exiled to Babylon. It's time to tell this unique story.