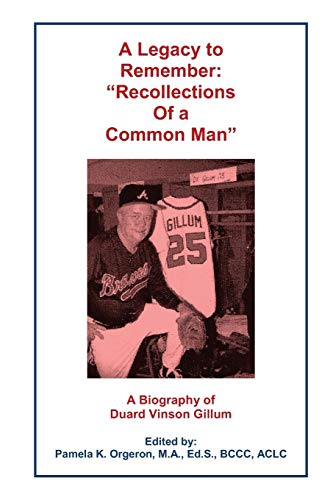 Book: A Legacy to Remember - by Pamela K Orgeron

about this book: The biography entitled A Legacy to Remember: "Recollections of a Common Man" was birthed out of my father's first cousin's autobiography Recollections of a Common Man. In Duard Vinson Gillum's autobiography he recounts having lived through the Great Depression, the great flood of 1937, and World War II. During the Great Depression he faced poverty and other traumas the likes of many in today's generation could not fathom. During the great flood along the Ohio River in Ashland, Kentucky, his family was displaced to a local church shelter when water rose more than halfway up the stairs than led to their second floor apartment. During WW II my cousin served as a Navy quartermaster aboard the USS LSM 36 stationed in the South Pacific. Although my cousin refers to himself as a "Common Man" in his autobiography, honestly, I believe quite the opposite to be true. After all, how often does a small town Kentucky hillbilly boy with only a ninth grade education grow up to become a department leader for Rockwell working on both the Apollo Moon Landing Project and the Space Shuttle Project? He's the only one I know. His struggle up the career ladder also was ladened with problems in his personal life. He experienced the heartbreak of divorce after the accidental death of his two and a half year old son. My cousin gave God the glory for having overcome all the tragedies he experienced in life. His final request in the conclusion of his autobiography was that one of his descendants would move forward with what he wrote to finish writing the last chapter of his life. My writing A Legacy to Remember was a fulfillment of my cousin's last request.