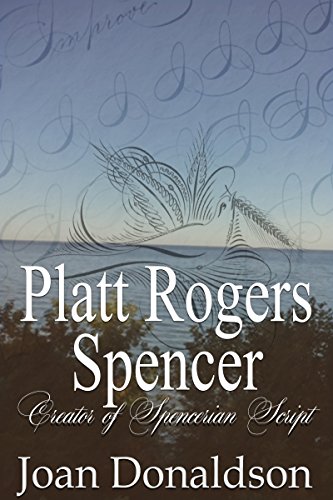 about this book: In the early 19th century, young Platt Rogers Spencer gazed out at the rolling waves on Lake Erie, and drew their angular shapes in the sand. He traced an oval pebble, rubbed away a bit of the lines and formed the letter G. Although Spencer was only ten-years-old, he created a new penmanship based on "the most perfect forms in nature" and one day would be called the Father of American Penmanship. Throughout his life, Spencer taught his Spencerian Script to thousands of students. He wrote the first copy books that teachers used to instruct students such as Laura Ingalls Wilder. In the mid-1850's Spencer also established the first business college in Pittsburgh, PA. The Master Penman also spoke against slavery and for temperance. A revival of his system of penmanship is taking place around the world.

• "We never give much thought to handwriting these days, especially as the ubiquitous keyboard has lessened the call for it and fewer children are taught penmanship. But in nineteenth century America, Platt Rogers Spencer developed a curriculum for legible handwriting that schools adopted."
— James McGrath Morris, author of Pulitzer: A Life in Politics, Print, and Power.