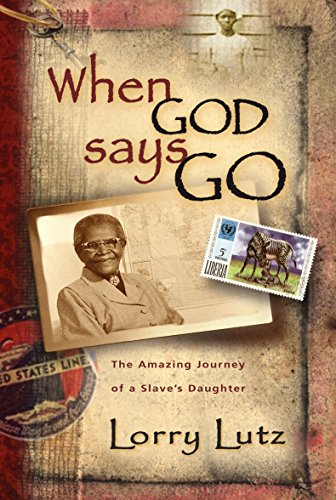 Book: When God Says Go - The Amazing Journey of a Slave's Daughter by Lorry Lutz

about this book: Mother Eliza David George -- the Liberian children just called her Mother George. Her parents had been slaves in Texas, and Eliza took advantage of her freedom to earn her teacher's certificate. At 38 years old, Eliza felt God's call to Liberia to save young girls from marriage to old men-- and to educate them. She stayed well into her nineties-- and I was in Monrovia when her "children" celebrated her 100th birthday.

Everywhere I went while doing research in Monrovia, I discovered that Mother George was a legend. Hundreds of people marched through Monrovia carrying banners: GREAT DAUGHTER OF AMERICA; GREAT DESCENDANT OF AFRICA; GREAT SAINT AND MISSIONARY MOTHER. Another read
HER LIFE WAS THE BEST COMMENTARY OF THE BIBLE WE HAVE EVERY READ --THE LIFE OF ELIZA DAVIS GEORGE.

Life was not easy in Liberia. Money was always short. Once Mother George walked 200 miles to redeem a money she's been promised; her marriage to Mr. George proved disappointing; her "children" disappointed her.

But she never gave up her love for Liberians and for God who had called her to serve Him. She often declared ,

IF I HAD A THOUSAND LIVES TO LIVE, I'D GIVE THEM ALL TO GOD FOR AFRICA