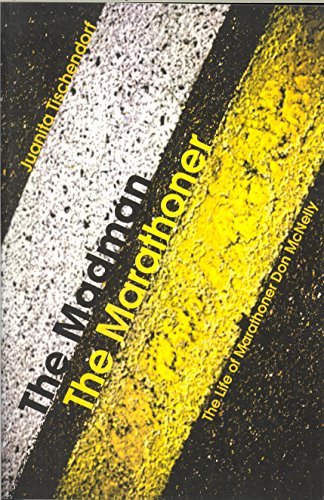 Book: The Madman, The Marathoner - The Life of Marathoner Don McNelly by Juanita Baskerville Tischendorf

about this book: In this day and age of keeping fit what better story to tell then the life of marathoner, Don McNelly. In the pages of this biography you learn of a man who lives life to the fullest. His experiences are more interesting than any fiction book. It is a story that needs to be told.

Don (Donald Pershing) McNelly, November 11, 1920, is the world record holder for number of marathons completed over the age of 80. He is ranked number 3 marathoner in North America and has done more than 750 marathons. Born in November, 1922 he still continues to run.

Don McNelly's first race was the 1969 Boston Marathon. He was 48 and had been running a mere eight months when he entered and completed in the marathon. By the end of four miles he was walking and running, but he stuck with it and crossed the finish line.

Don began running when a couple of his best friends died suddenly of heart attacks. The thought of this happening, scared him into action.

When Don started running in 1968 there were approximately 30 people his age who were competing in marathons. Today of that original group, there may be about two or three left. Don continues mainly because he loves to run, but also because he has never cared whether he won, but did care that he be able to keep on running and finish the marathon. His wife and kids have been behind him all the way. Phyllis arranged the family meals so that Don had adequate time to run each night. She has supported his need to do marathons by turning it into a family vacation or get together. Without this support, a family man like Don could not have made his need to run work.

Don is also a veteran of 101 Ultra marathons and was able to complete three times in the 86 floor Empire State Building "Run Up". He has run in every state as well as in Canada, Norway, Japan, Iceland, Mexico, Cyprus, Greenland, Italy, Argentina, Antarctica, Portugal, Thailand, Panama, Germany, France, Holland and England. He is the only American to be a member of the Full Hyaku (100 Marathons Club) in Japan and a member of the 50 States & D.C. Marathon Group U.S.A.

Not only marathons, but volunteerism is also close to his heart. He spent five years as a volunteer for the Seneca Zoological Society; he stepped down after three years as president to become a Trustee Emeritus for the Seneca Park Zoo. Don also serves as an Honorary Member of the Board of Directors for the Golisano Children's Hospital at Strong in Rochester, New York.

Prior to becoming what some call a madman because of all the marathons he runs, Don served as a Navy Officer in World War II aboard the USS Kyne, a Destroyer Escort, DE744. Don was overseas for 13 months and is a veteran of the Philippines, Iwo Jima and Okinawa campaigns. During the occupation of Japan Ensign Donald McNelly was aboard the first US destroyer to enter Tokyo Bay.

In 1952 the McNelly's moved to Rochester, New York, where they presently reside. Don retired as vice president and director of the St. Joe Paper Co. in 1989 and has remained active as a world-class marathoner, community volunteer and fund-raiser in Rochester.

Don first faced cancer in 1988 and then again in 2007. Since he had his prostrate cancer he has made himself available to other men diagnosed with the disease. Don believes in talking about a disease that renders many men silent.

With his family being the support system, Don's legs have been the vehicle to his expanding world. Some of his runs have been marathons (26 miles, 385 yards) and others have been ultra marathons (50 miles, 62 miles and even 100 miles)

Today Don admits that he keeps getting slower and actually adding 10 minutes a year to his time after hitting the age of 72. At age 70, Don was the worlds oldest mega marathoner which is one who has completed 200 or more runs at the 26-mile, 386-yard distance. And the beat goes on. Don has run a personal high of 30 marathons a year. He estimated when he turned 70 that he had run across 35,000 miles of asphalt, cinders and cement in four foreign countries and 28 states. On that day that he turned 70 he celebrated the best way he knew how. He ran in the Columbus, Ohio Marathon and finished in 4 hours 43 minutes.

Nowadays Don would will turn 90 this year must save his energy and so he does very little training during the week. Usually there will be a brisk walk and some light jogging as he averages one marathon every week and a half. There was a time when Don was able to run a Saturday-Sunday back to back marathon, but that time has come and gone. But he's not stopping.

Don didn't plan it this way, all these marathons, medals and global hop scotching. His goal was to break four hours, which later became 4 ½ hours, then 5 hours to complete a marathon. Then his viewpoint changed and he became caught up in numbers. Don reached his 100th marathon/ultra in 1981, his 200th in 1987 and so on until he ran his 500th in 1998. At that time he predicted he would reach his 600th by 2002. He set is final goal as 1,000 marathons by the time he reaches 98.

I found out by giving it a try myself that a marathon is a satisfying achievement for anyone who completes one, regardless of the final time. Whether it is run in five hours, four hours, or in the elusive three hours or less, finishing the marathon brings great satisfaction. It is the fulfillment of a commitment to train and follow through on a program that allows us to step to the starting line ready to take on the challenge. Finishing the marathon announces to the world that we have met that challenge and conquered the distance.

Other books by Juanita Tischendorf (more)