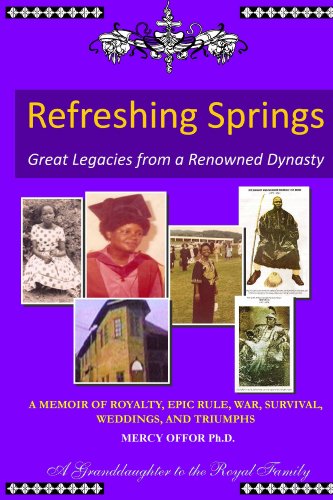 about this book: Great Legacies, refreshing spring is a biography and an author biography in one. It chronicles the life and times of my grandfather, His Royal Highness king Solomon Ezebube Ezeokoli and my early childhood as a grandchild to the beloved royal family. Granddad died in the early fifties at a ripe old age and ascended the throne after his father in continuation of a very long dynasty. Great Legacies therefore spans an era from the middle of the 19th century to the middle of the 20th century.

This is an African story that began in a small town known as Nnobi, in the central part of Eastern Nigeria, one of the countries in West Africa. It brings to light vanishing rich customs and traditions of the people of Ibo-land while telling an epic story of benevolence and a loving leadership.

This is a unique tale of a little known people in what can be described as a remote area of the world. It aims to keep alive customs and traditions that would otherwise vanish forever. The tale of the warriors remembered in Great Legacies runs parallel to the Greek tales and tragedies, while being uniquely African. It has the elements of a masterpiece especially in exposing vanishing traditions, customs and ways of life of a little known people and generations.

The biography follows the author from her humble roots in the heart of Africa to the United Kingdom and the United States and exposes details of the long and bitter war known as "The Biafran war" which the author lived through. Great Legacies is for people of all ages, especially those with minds for adventure and exploration as well as those who love to discover and those for whom History holds a fascination! As can be imagined, Great Legacies took years to put together because of time needed to research into the past to uncover what took place in the 1850s.

This nonfiction is written as an inspirational tale to inspire readers to reach for the sky and to know that with determination, vision and a good heart, all dreams should come true and great footprints can be left on the sands of time for generations yet unborn.