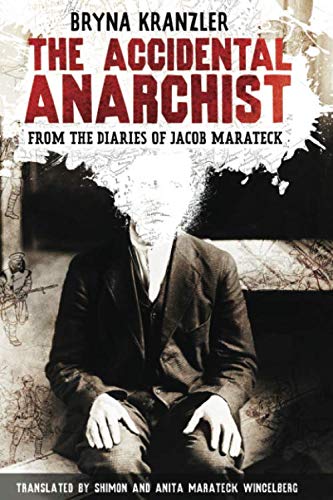 Book: The Accidental Anarchist - From the Diaries of Jacob Marateck by Bryna Kranzler

about this book: What kind of man needs to be sentenced to death more than once to learn his lesson that standing up for his principles did not pay in pre-Russian Revolution Russia? My grandfather, Jacob Marateck: that's who. He was sentenced to death three times, and exiled to Siberia, for defending his Jewish heritage and trying to overthrow the Czar, among other things. Despite poverty, starvation, and the horrors of the Russo-Japanese War, he never lost his sense of humor, which is evident in the book, which is based on the diaries he kept during the war. They also describe what it was like to live as a Jew in the Russian-occupied territories (which included Poland) in the late 1800s and early 1900s.

After sharing his stories, in his unique sense of humor, with many people for years after he escaped to the United States, he finally sat down to complete what he had started writing during the war. Once he started, he didn't stop for the next 20 years. And on the very day he finished writing -- by then he had filled 28 composition notebooks -- he passed away. As his granddaughter, I fulfilled his wish of sharing his adventures with the world.

The Accidental Anarchist is a story told by a wide-eyed optimist who loved adventure and excitement, even when it meant risking his life. He also stood up for his friends, incurring the same risk. He is a man you will grow to love as you see his resilience, drive, and most of all, his sense of humor. I wasn't privileged to know him personally, but I became close to him by spending time with his diaries, and it is in his voice, with his own words, that the stories in The Accidental Anarchist are told.

Read more about him at my website: www.TheAccidentalAnarchist.com, and see excerpts of my speech about the story behind the story of The Accidental Anarchist.

Video: Excerpt of Presentation About The Accidental Anarchist