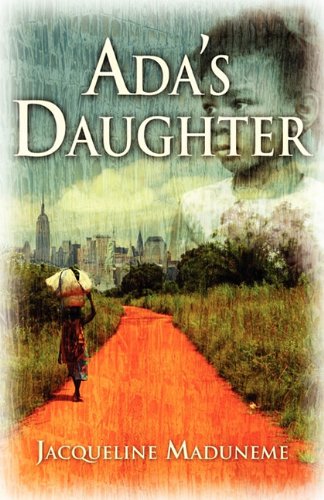 about this book: Ada's Daughter is about the triumph of the human spirit in the face of a lot of dark situations. It is my story about my journey and struggle to overcome the harshness and cruelty dealt to me by those closest to me—those I trusted and loved.

• What inspired you to write this book?
I think my inspiration was the economic crisis of 2008-2009. It was a very overwhelming time for everyone. Our lives and the way we expect the world to work were shaken to the core, and people were at a loss with how to approach the uncertain future. And I was shocked to find out I was in that number. You see, while I've had to go through or around a lot of roadblocks to rebuild my life and have a successful career, I think somewhere along the way, I had become comfortable with the life I built for myself so that when I was riffed in 2009, I was at a loss with what step to take next. I wrote this book to remind myself where I had been and how far I had come—sort of a kick in rear to get out of my rut and re-energize my spirit—and to inspire others who have experienced or are going through circumstances that may seem insurmountable.

• Who are the primary readers for the book?
This book is for anyone, man or woman, who is looking for the inspiration to change their life for the better.

• How did you come up with the title?
The process took me six months. I started out with the title The Wealth Within, but that title did not resonate with me. While it was not a terrible title, it did not inspire me to write. I tried a few other titles to no avail. A few months into this process, I was at the gym one morning when one of my neighbors came in for a workout. The conversation turned to my book, which my friends were eagerly anticipating at this point, because that was all I talked about. I mentioned to her my struggle to come up with an inspiring title. A few days later, she put me in touch with a friend of hers who owns a company that performs market research on book titles for publishers and writers. I spoke with him, and while I didn't retain him—I just could not afford his services—he was kind enough to offer me general advice on book titles that work well for my genre. This must have been about five months into my writing process. About a week or two after I spoke with him, I woke up one morning, and the title Ada's Daughter popped in my head. It felt right. Ada is my mother's name. I knew at that moment this had to be the title, and when I sat down to write with this title in mind, the words came easily to me.

• Why did you choose this cover?
I wanted a cover that captured my journey from Nigeria, where my story began, to New York City, where it continued. New York City is my adopted city in America and that's where I lived when I started the book, and it was important to me to capture the essence and richness of both worlds on the cover.

• What was the hardest part of writing your book?
The hardest part about writing Ada's Daughter was remembering and reliving my dark and difficult past, which I had worked hard to forget. I cried a lot as I wrote each page, and during the editing process, I cried as I read and re-read each page. I was very cleansing.

• Did you learn anything from writing your book and what was it?
Yes I did. I learned that I am strong and that I truly have the will to accomplish anything I set my mind to. I learned that the world is not as unkind and mean as I grew up believing it to be; that there are good people in the world; that if I am willing to leave yesterday behind, embrace the present and step into the uncertain future with courage, determination and hope, using the lessons, experiences and scars from my past as a springboard to build a better future for myself, I would make a difference, not just in my life, but in the lives of others.

• Do you have anything specific that you want to say to your readers?
Ada's Daughter is thought provoking and captivating. Once you start reading, you will not want to put it down. It will move you; it will inspire you; it will motivate you. Get your copy today!

Ada's Daughter is a well-written memoir that takes you on a compelling journey of the resilience and power of the human spirit. I laughed, cried, and related to the intricacies of multiculturalism. You will recognize the fear that generates human selfishness and lack of compassion. You will identify the healing that comes from embracing your demons (no matter what size, we all have them) and confirm the power of forgiveness. I thank Jacqui for her courage and candidness. [by Diana Saillant]

I spent 10 hours today reading this book — riveting! Never thought someone could go through all that Jacqueline suffered and still survive! The mental, physical, sexual abuse made me cry. I've always asked myself why victims of abuse don't/can't say what's happening to them as at the time and I realized 'it's not that easy' especially if 1 opens up and have no 1 believe! Sigh, this is a great book about a woman's strength to carry on despite all she suffered in the hands of family, friends and lovers. Strongly recommend this book to anyone old enough to read and understand. [by Adeola A.]

Jacqueline's voice is true and candid... her story compelling. Her indomitable spirit propelled her to success against all odds. I've also had the pleasure of hearing her speak... what an inspiration! [by Shari Stauch]