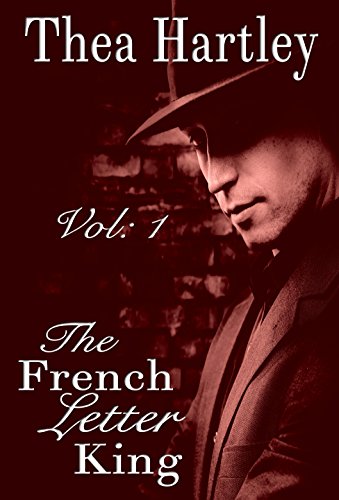 about this book: This book is a biography, but very readable. It reads like a novel, with dialogue, which I have used with literary license. It covers the period 1900- 1945 when Tommy Horton, then a nineteen year old , moved from Sengenydd, a mining village to the big 'city' of Merthyr Tydfil.

At the time, Merthyr was a prosperous town at the centre of the Industrial Revolution. This is not just an account of a period in Tommy's life, but also an in depth social history of the Soith Wakes valleys, before and during two world wars.

I always wanted to write this book From the age of about seventeen, which is a quite a time ago. I also always knew that the title would be " The French Letter King" because that was the nickname given to both my grandfather and father.

Children, would snigger, and shout " Here comes the Frenck Letter King" as my grandfather strolled with his high necked shirt, three piece suit and a trilby, placed jauntily on his head. He would just laugh and continue walking, his head held high and proud, he was the French letter King...the first man to manufacturer condoms in the United Kingdom. It made him his fortune after a life of poverty and risk taking.

I researched as much as I could. I set out to either prove or disprove family stories. My father said he was an only child, ( he had a baby sister who died aged four days) , there was once a whisper that my grandfather had been in jail. I asked about it and was told no, that was silly...it was smeone mucking about. He actually served two years in Knutsford jail. Cheshire.

My research through family documents, photos, geneology records, births marriages and deaths, records of the assizes and old newspaper accounts lead to me discovering a great deal about my grandfather and his very colourful life.

I chronicled it all, including tales from family lore. I checked dates, details and descriptions...and ended up with this wonderful book.

This is one book you won't want to put down

When Tommy Horton arrived in the Industrial town of Merthyr Tydfil in 1900, little did he realise what lay in store for himself.. A wheeler and dealer of his day, he set about to make his fortune, venturing into various deals, including pawn broking. After spending a period of time in prison, he eventually opened a rubber factory in the town to make `French Letters;', which as well as needed by the townsfolk, were in demand by the troops throughout the first and second world wars to combat sexual diseases.

Tom married and had an only son called, Ron. Both had a tempestuous relationship which is evident throughout this book. At times Tom could be controlling and manipulative toward his son and Ron, although defiant at times, often buckled to the will of his father.

But the making of Ron is a love of a good woman called, Lorna.

This story is set against the back drop of the South Wales Valleys during a period of time when there was much hardship in the towns of Merthyr Tydfil, Tredegar and neighbouring valley towns.

This story will transport you back to a time when rationing came into force and black outs were the norm. Where families found it difficult to feed another mouth, so places like Tom's rubber factory were needed. The women who worked there preferred to tell others they worked elsewhere. Indeed it was common place to tell people they worked at `The Butter Factory'. Such was the stigma of the day.

This is an excellent novel that not only brings to life the history and geography of Merthyr Tydfil during both world wars but weaved throughout it are two love stories: Tom's relationship with his his initially unappreciated wife and Ron's relationship with Laura, the feisty ballroom dancer from Tredegar.

The characters in this novel leap out at you from off the page and this book will keep you reading long into the night. This is one novel you won't want to miss out on!! [by Lynette Rees]