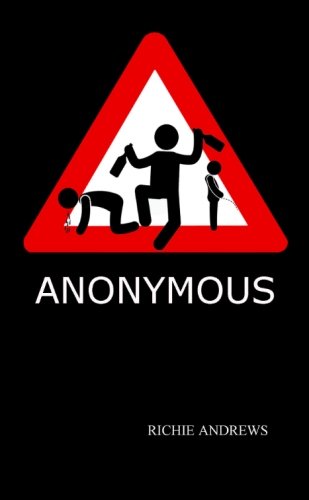 about this book: Anonymous is the debut release by Richie Andrews. It covers a culture marred by controversy and bad press. That is the binge-drinking culture.

The story surrounds a group of friends. Narrated by one of them, Joe, it follows their exploits as they go into each weekend hoping the excess will be even more enjoyable than the last.

This book provides a view of the social world inhabited by anti-social people, whilst exploring their relationships, hopes, priorities and fears.

Inspired by the very world the author was living in at the time, this book was researched practically by the author physically taking part in the culture it depicts. That certainly doesn't mean the book is autobiographical. There are certain moments and incidents in the book that have happened to people that the author has socialised with. However, most of them are exaggerated in the story.

The front cover is of a modified English road sign. A tongue-in-cheek warning that the dreaded binge-drinking culture lies ahead, considering the bad light it is often shown in when it comes to the national press.