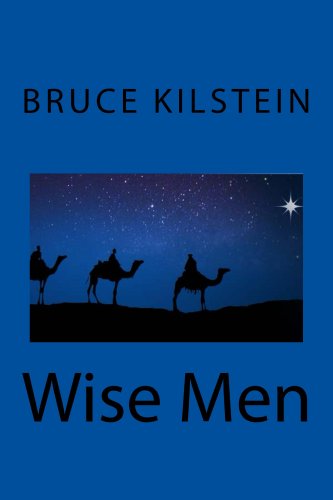 about this book: I was driving down the road and saw a billboard that said, "Wise Men Still Seek Him." I assume it was a religious advertisement of some sort, but it got me thinking about who the Wise Men that come to the birth of Jesus are. Where did they come from? What do people put plastic statues of them on their lawns? Turns out, nobody really knows and they're only mentioned briefly in the Bible. I got to thinking about the story and wondered what would be the historical context of their journey. Wouldn't it be fun to write the story from their perspective? Then I thought, who would the Wise Men (or women) be today if the story was set in modern times? What was the Star of Bethlehem (and why didn't anyone but the Magi notice it)?

I decided to write the two stories simultaneously.

I researched biblical history, the history of first century Judea and the likely candidates for Wise Men would have been Magi from the Kingdom of Parthia (Modern Iran). Why should they visit? Turns out the Parthians, like the Jews were enemies of ancient Rome (who were able to occupy just about everywhere in the Middle East at the time…except for Parthia. The Parthians observed the only monotheistic religion (Zoroastrianism) other than the Jews. So, if there was a birth of a Messiah of the Jews in Israel (a country occupied by Rome and ruled by a puppet dictator, King Herod) the Parthians would be very interested in sending emissaries to investigate the situation and maybe forge an alliance.

Meantime, if all of this this was going on in modern times, I think governments would want to do what they could to covertly control such important information that could destabilize the world.

In the ancient story a young Magus, Jem, makes a startling astronomical discovery; he tells his mentors and soon is sent on an expedition with global ramifications. He is thrust into adulthood and new responsibility and doubts his abilities to fill the very big shoes of his father and uncle.

In the modern story, an astronomer, Joshua Levine, nearing middle age receives a late night visit of on an old college nemesis. He is told that a secret branch of the NSA requires his services to investigate a fringe religious group operating in the Jordanian desert. Josh is teamed with a beautiful archaeologist and a computer expert and sent on a journey that changes both the world and his own perceptions of his place in the Universe.

Both Jem and Josh are thrust on journeys of personal discovery and political intrigue. They find themselves in both physical and moral danger and they must decide whom they can trust and if they are up the shouldering the great responsibilities they have taken on.