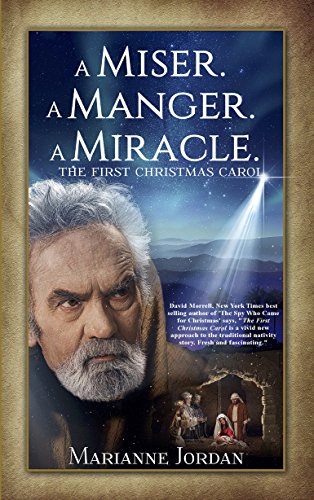 Book: A Miser. A Manger. A Miracle. The First Christmas Carol by Marianne Jordan

about this book: In 1999, I was the director of the youth drama team at our church. We were to perform a Christmas play, and I just couldn't find any scripts that appealed to me. Either they'd been done over and over, or they lacked enough parts for my thirty something students. So, I locked myself in a room at the local Holiday Inn Express, and two days later walked out with a script for THE FIRST CHRISTMAS CAROL.

The play had a massive impact on so many people. Not just the young people and me. Members of the church volunteered their time to make authentic costumes. Artists and builders designed sets, and videographers recorded all the vision sequences. We began to get news coverage, and ended up having to perform an extra night.

But then it was over. Or so I thought.

People began to encourage me to turn the play into a book. To write the story I really pictured. I'd never written a book before, and so I never really took the thought seriously. I'd write a little, then put it away. This went on for ten years. Who was I kidding? I'm not a writer. But every so often, I'd pull it back out and wonder. The story just wouldn't let me go. Finally, I went to a writers' conference in Dallas, Texas. Then another one in the North Carolina mountains. I was hooked, and the story became so much more. It came alive.

I believe this book will change how you think about Christmas and Easter. I also believe that you'll find yourself somewhere between the pages. And I hope they become worn and dogeared from use.

I hope A MISER. A MANGER. A MIRACLE. The First Christmas Carol blesses you too.