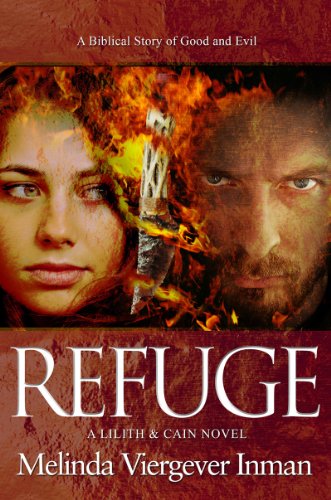 Book: Refuge (A Biblical Story of Good and Evil) by Melinda Viergever Inman

about this book: All Cain wants to do is marry Lilith, but he's thwarted and frustrated at every turn. Nudged toward evil by Satan, Cain's hard-hearted hubris results in tragedy and Lilith's broken heart. Crushed by what he's done and banished by God, Cain runs, certain he's destroyed Lilith, his parents, and the entire family. After committing sins of such magnitude, he's unworthy of forgiveness, certain he'll never find God again.

Recovering when we've committed grievous sin and accepting the consequences are challenges that have the potential to destroy us or to make us a stronger person. What will become of Cain?

Inspired by the earliest events recorded in the Bible and the ancient tales swirling around those events, each book in the Biblical Stories of Good and Evil series has been thoroughly researched from Biblical and theological reference sources. Yet each book (Fallen, Refuge, and Proclaim) is crafted as a story, pure Biblical fiction, bringing these intriguing stories to life to illustrate God's passionate love and mercy toward humanity.

By the time the final book in the series is published, over ten full years will have been devoted to the research and the writing. I wanted the angels and demons that inhabit this series to be depicted as near as possible to Biblical norms, so I spent an entire year researching demonology and angelology to discover everything the Bible says about these supernatural creatures. Then I conveyed all I had learned into my fictional characters with thoughts and dialogue.

• "This book has it all. Murder, love, revenge, and redemption. Melinda Inman takes a pivotal story from the past and shows us the truth and peace in real redemption - exactly what we all need" — Cindy Sproles, Executive Editor, ChristianDevotions.us.

• "A magnificent story that restores hope for our brokenness and leaves God firmly enthroned and in control of His creation!"
— Bruce Van Horn, Inspirational Author.

Video 1: Refuge, The Novel - Trailer
Video 2: An Interview With Melinda